‘King George’ is a historic jewel in East Fremantle’s hip George Street that has been converted into a truly modern house for a young family. Careful alterations to the Grade-A State-listed heritage cottage were combined with a starkly contemporary extension to provide an eye-catching, adaptable home.

The brief called for the creation of a modern working-family home that respected the heritage-listed, much-adored cottage yet introduced functionality and excitement. Interventions to the cottage were minimal: they included the insertion of skylights in a dark hallway, converting the existing kitchen and bathroom into a family-sized bathroom, reinstating a bullnose verandah plus general restoration works. The only alteration made to the existing external walls was to widen an opening to form a link to the new works. The modern kitchen now adjoins the existing and tucks under the original eaves. A courtyard off this space was created to connect to an office, garage and guest-bedroom suite.

With Grade-A heritage listing, the workers’ cottage had to remain the star. The concept was to respect and highlight it the original structure by orienting the bulk of the new extension towards the rear laneway. The angled wall of the office created to face George Street references the cottage’s roof angle. The building height was suppressed through the centre of the home (over the kitchen) but then rises above the guest suite to align visually with the commercial parapets to the east. This seamlessly anchors the house into its immediate surrounding.

The chosen materials also create context: red-face brickwork picks up on existing tuck-pointing; concrete lintels are a modern interpretation of traditional design elements. Three-toned glazed red brickwork – laid in an ombre pattern wrapping around the office – is a play on the heritage reds of the cottage. Charcoal aluminium cladding on the exterior was intended to recess into the background, allowing the street-level scale to dominate. The use of quality materials that reference the existing vernacular of the area was crucial to maintaining the character of the neighbourhood.

It was essential to create a sense of spaciousness on the small site. Elongated sight lines from the existing entry, through the new courtyard all the way to the rear laneway, were part of the strategy. Level-floor thresholds and matching floor finishes run from the kitchen through to the courtyard, resulting in one coherent space when the glazed bi-fold doors are open. The owners intend to use the nearby parks and cafes as extensions of their home, hence gardens are minimal and low maintenance.

With a mixed-use zoning, the home incorporates a self-contained office and a bedroom that can be leased out. The owners also opted to forego a traditional dining room in favour of a more flexible kitchen and casual eating area; it made sense to allocate more of the limited space to areas the family would use every day. We achieved versatility through the design of a kitchen-island bench that is a prep space and breakfast bar generally, but can act as a dining table for six when moved next to the window seat. The inbuilt courtyard seating is an extension of the garage floor slab; this same flowing concrete form then drives upward to form a BBQ benchtop. A table can be moved into this courtyard nook to allow a group to dine outdoors.

NOD TO THE PAST

The interiors are bold and experimental (and resulted in a ‘Best in State’ for WA at the Australian Interior Design Awards 2018). The client wanted a home that had a luxurious hotel feel yet paid homage to its important heritage.

A low, dark timber-ribbed ceiling demarcates the transition from the old to the new zones, compressing the space before it opens up into the modern kitchen. Mantels over existing fireplaces were replaced with thin pieces of highly polished Nero Marquina marble; this material was repeated in benchtops throughout. White oxide concrete flooring and glossed black timber dramatically contrast with the traditional, matte finishes of the original cottage. Jack Flanagan, a prominent local furniture designer, was engaged to create a sculptural metal base to the movable kitchen dining table. New robes were inserted into the existing bedrooms to modernise the home respectfully while still maintaining the existing cornices and skirting boards. The interior spaces retain a sense of space and light. High-quality materials were successfully balanced with simpler finishes to ensure a luxurious, timeless feel without exceeding the budget.

Externally, materials that will last without the application of finishes were selected, such as face brickwork, aluminium cladding, exposed concrete lintels, Equitone panels and steel. Passive design principles including cross-ventilation, the positioning of the courtyard to receive north eastern morning light within the kitchen, and the installation of high-specification glass were employed. A private, screened northern terrace extends from the upper-floor bedroom to make the most of the light where possible. Steel fins were installed to allow the enjoyment of harbour views from the upper-floor bedroom by filtering and softening the sun and wind resulting from the western orientation. 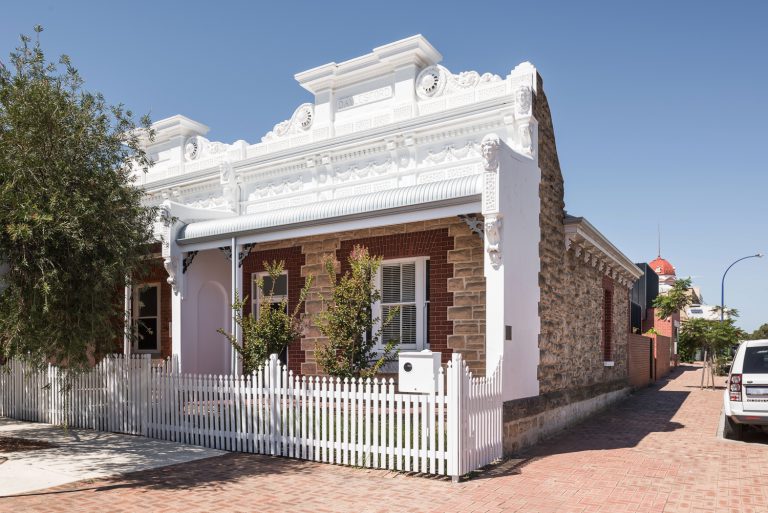 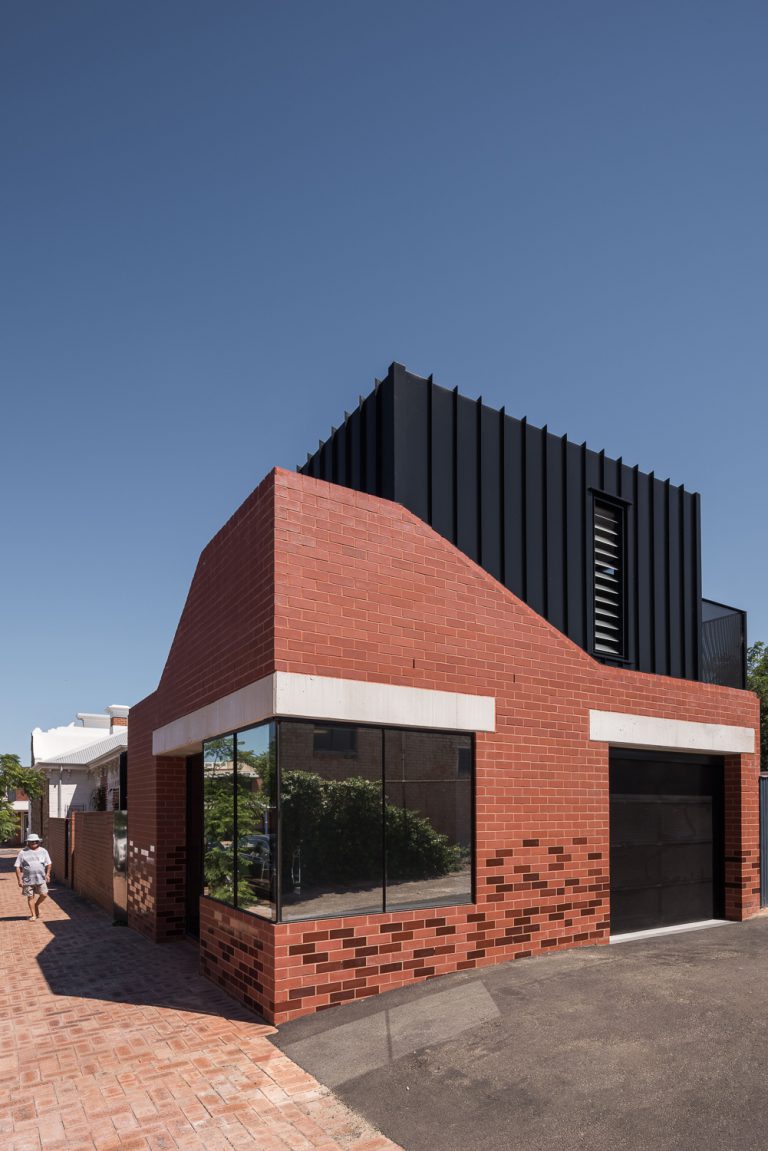 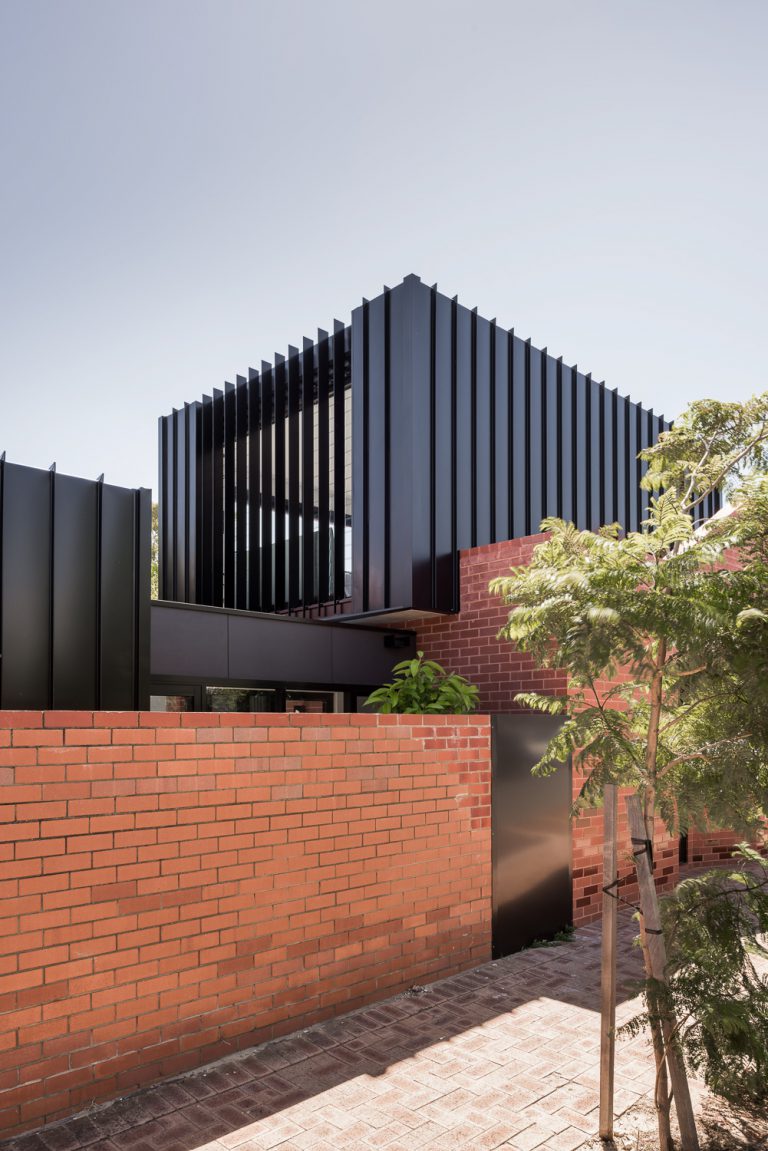 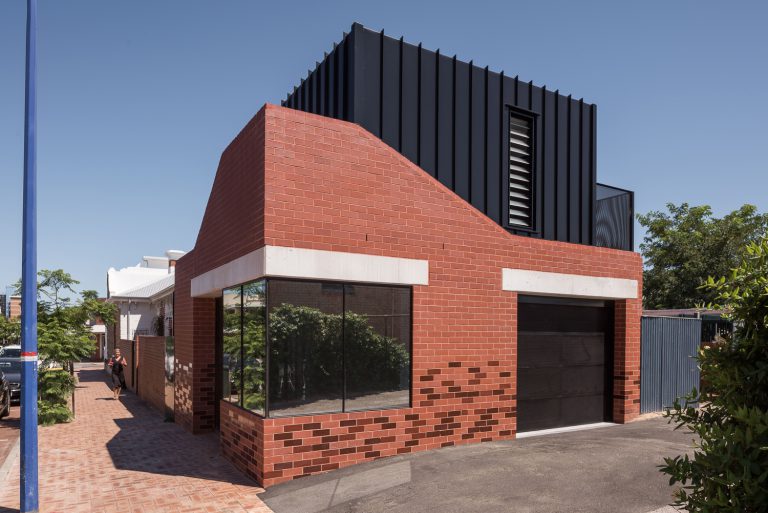 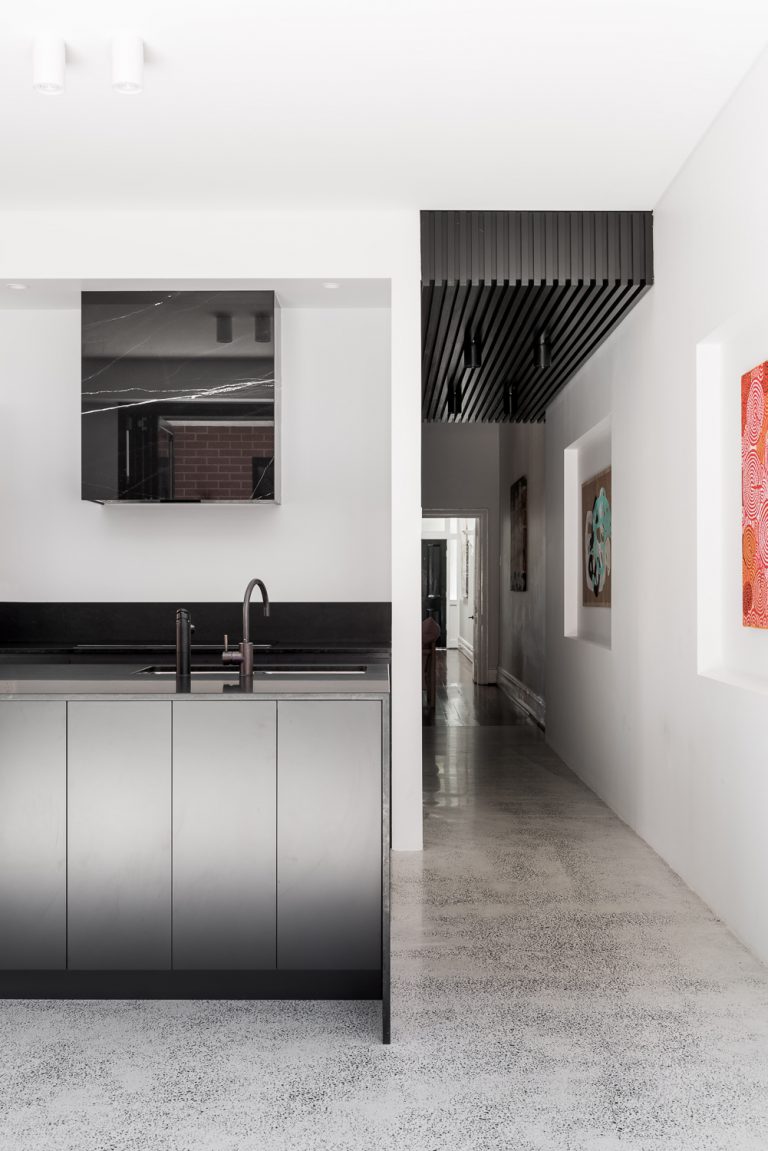 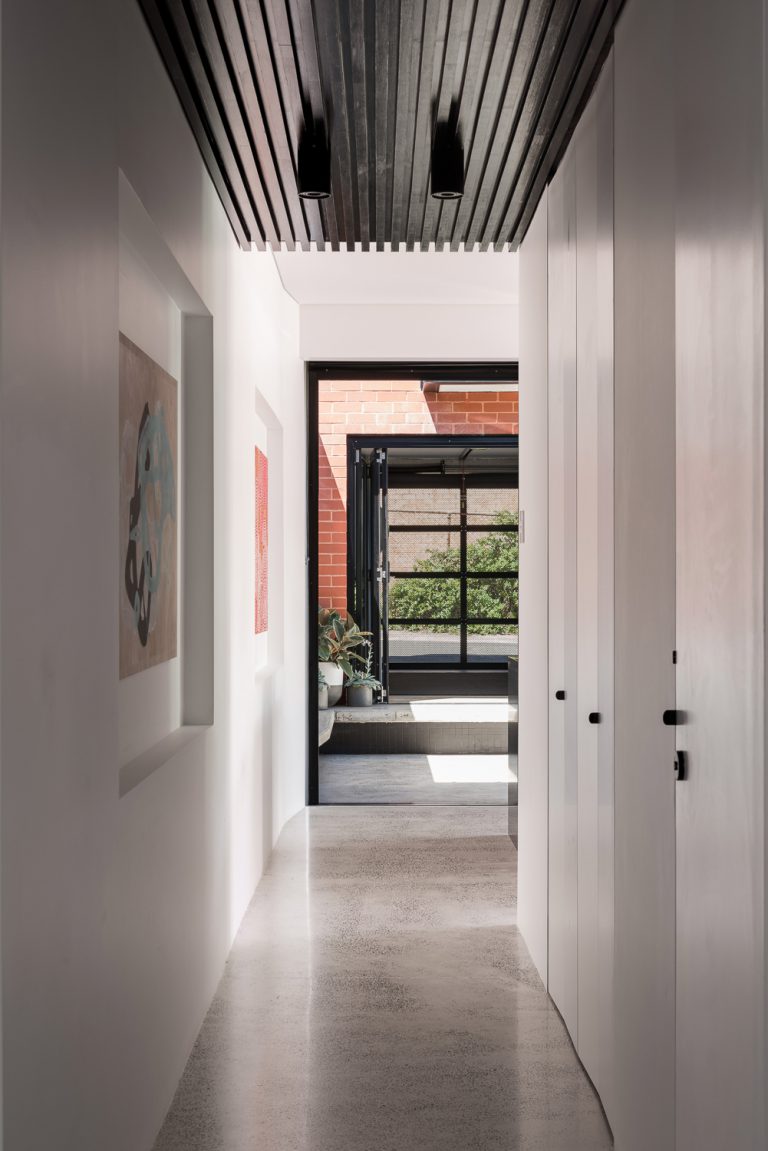 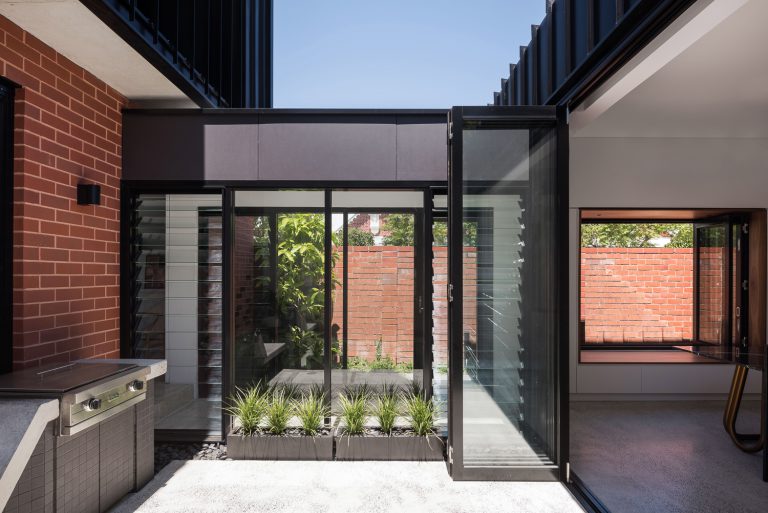 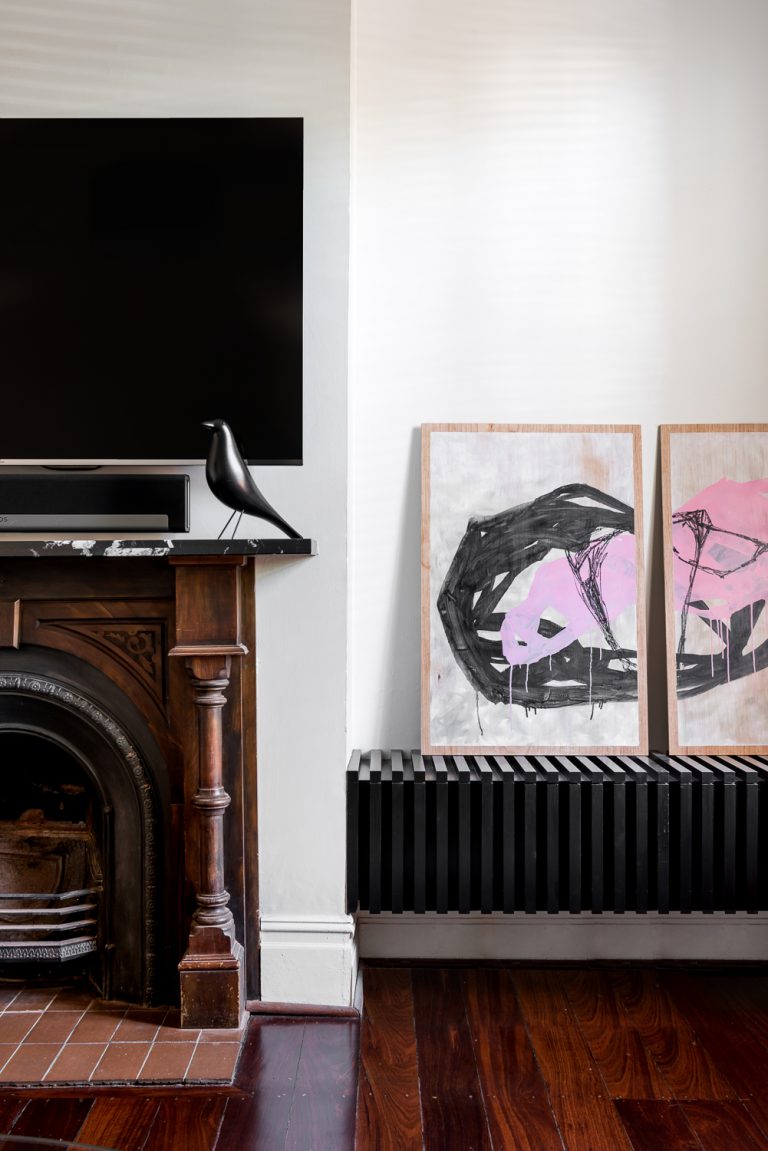 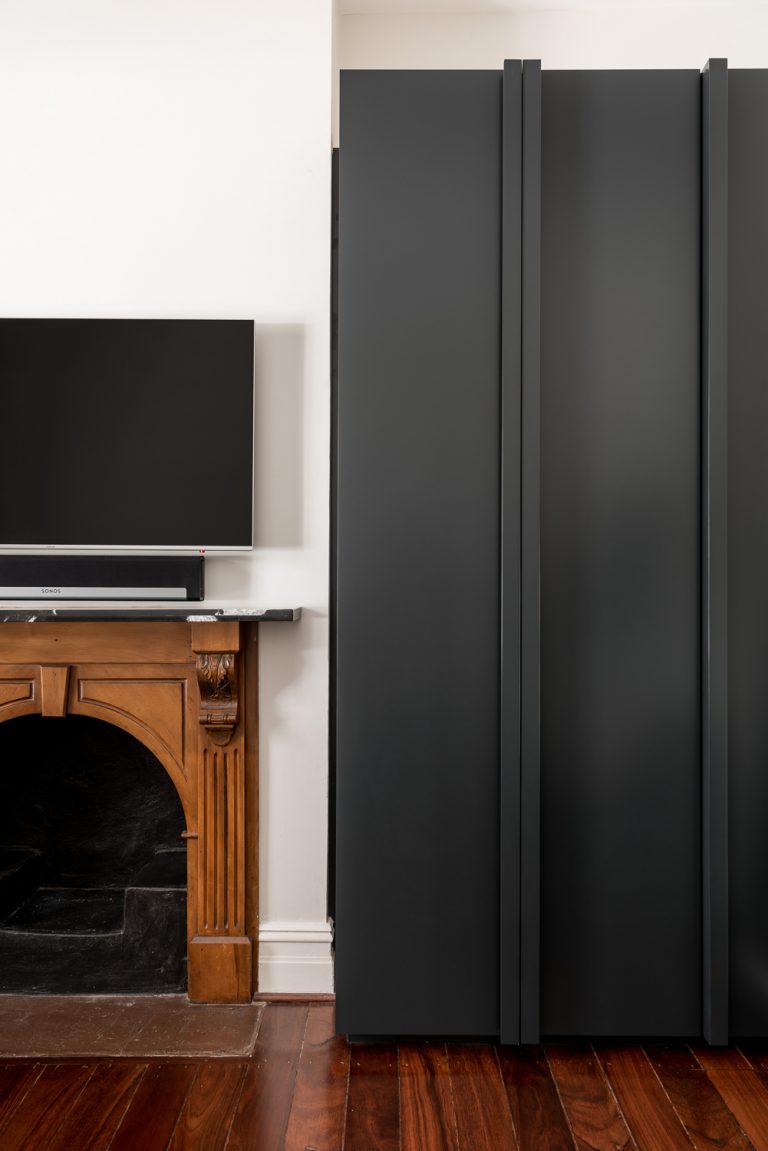 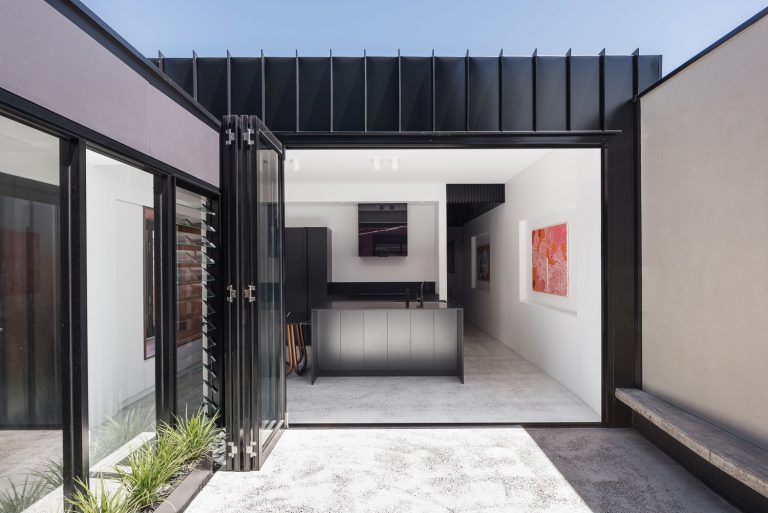 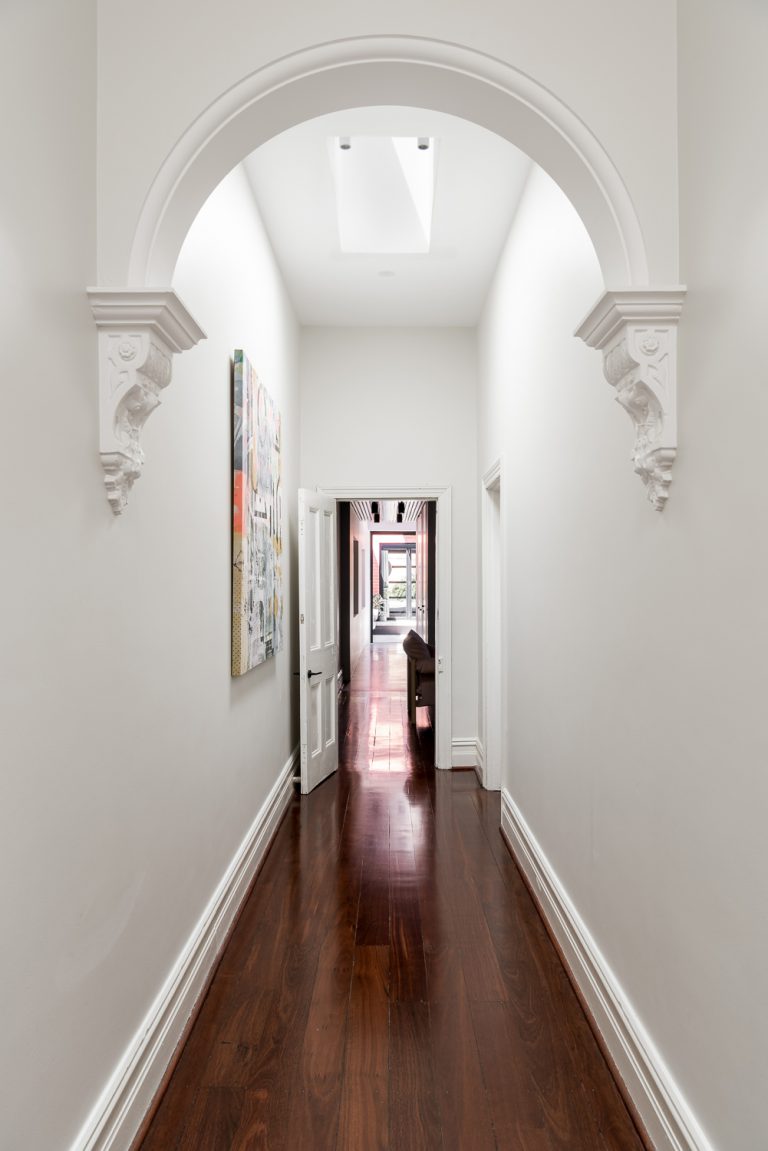 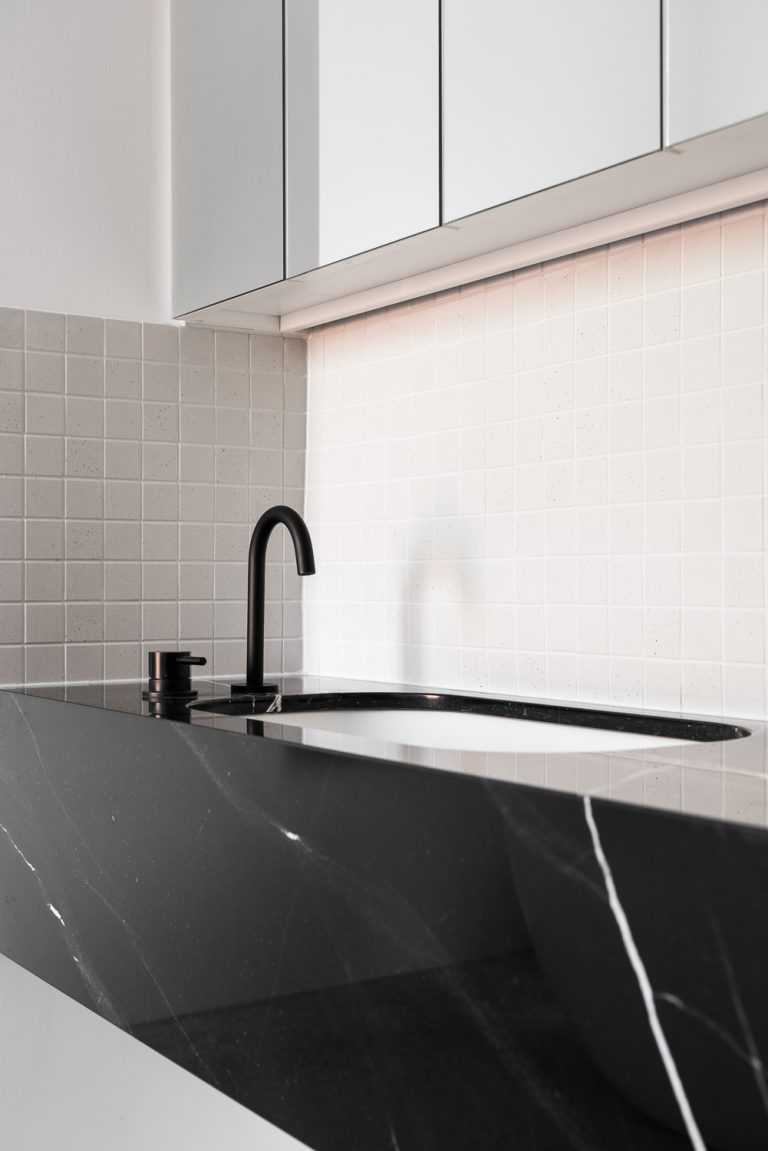 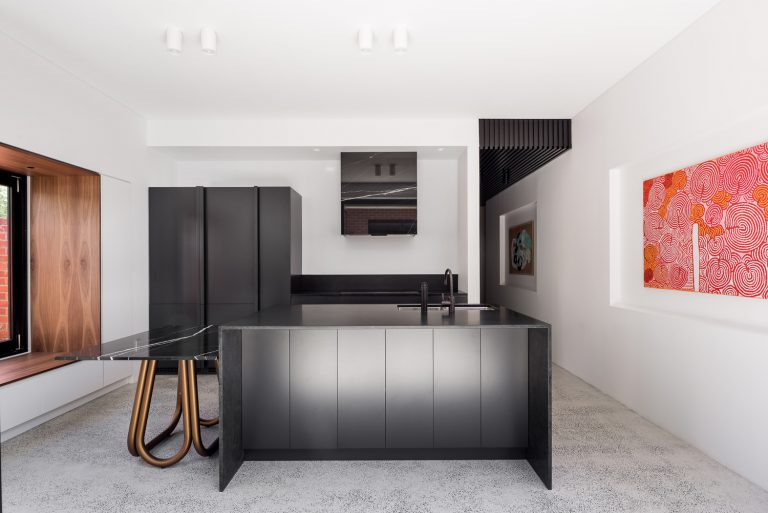 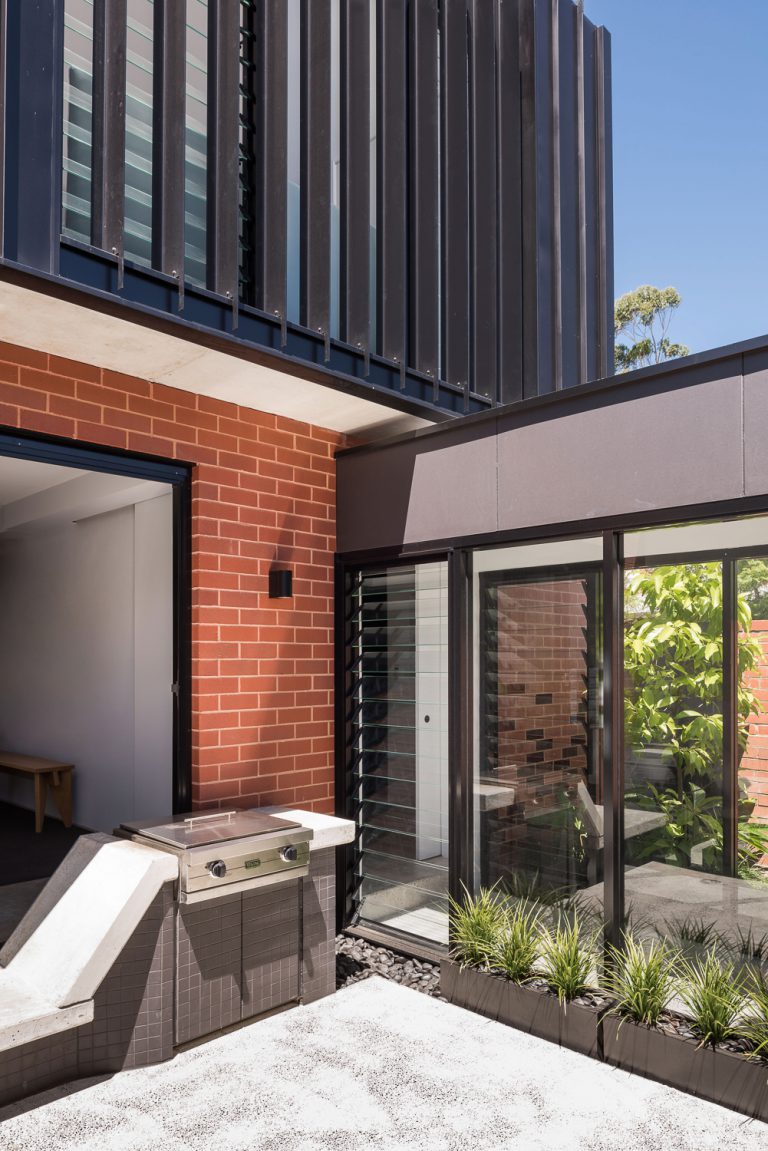 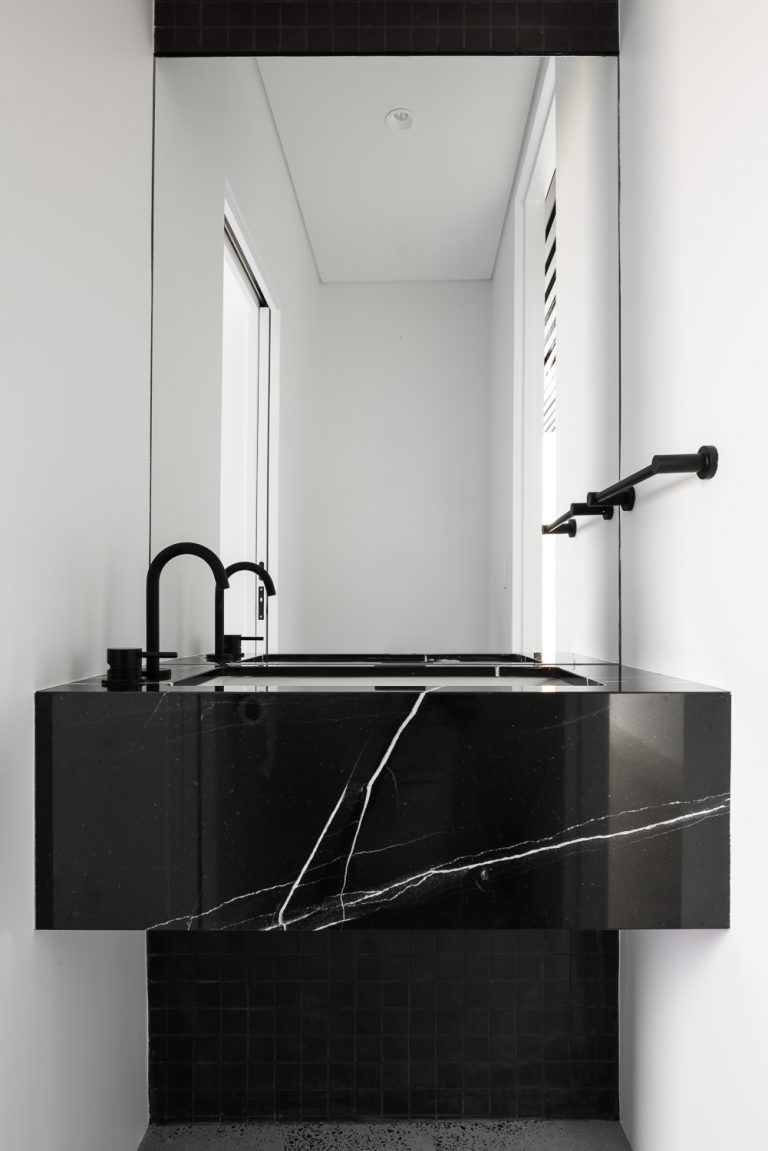 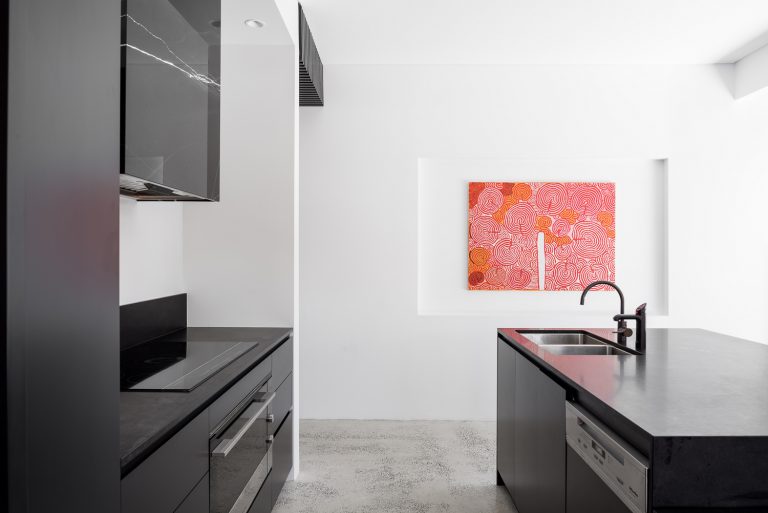 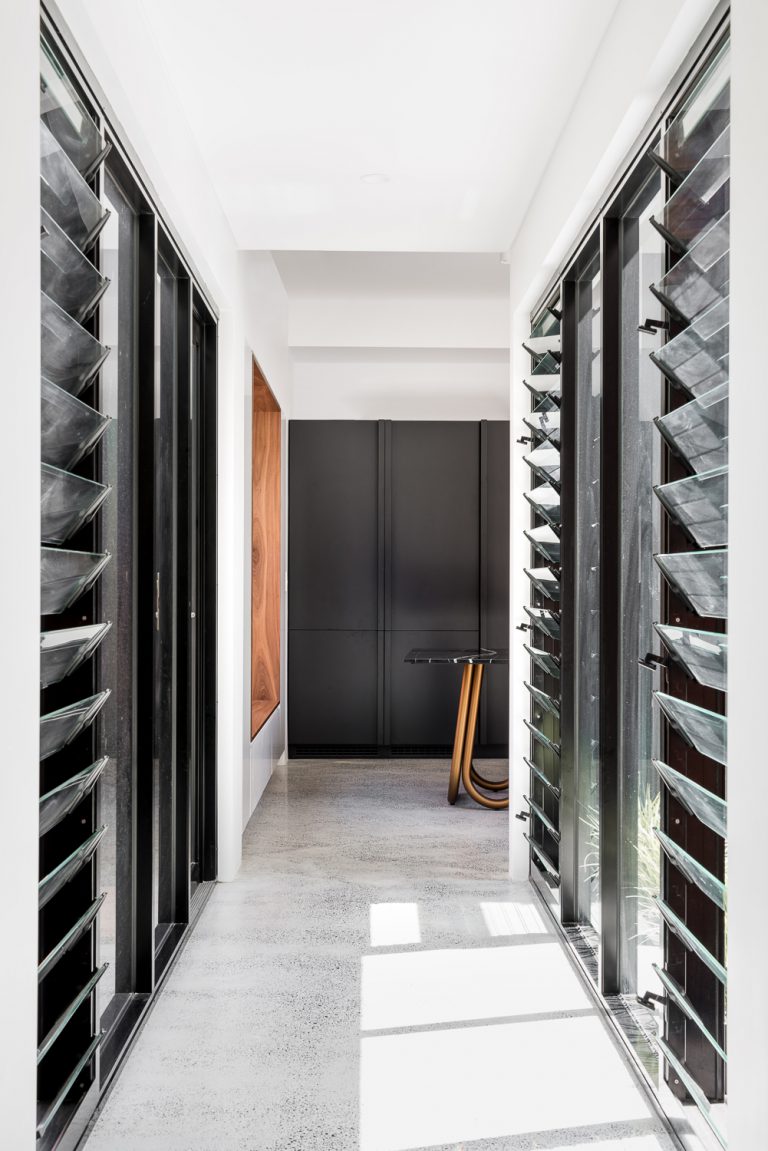 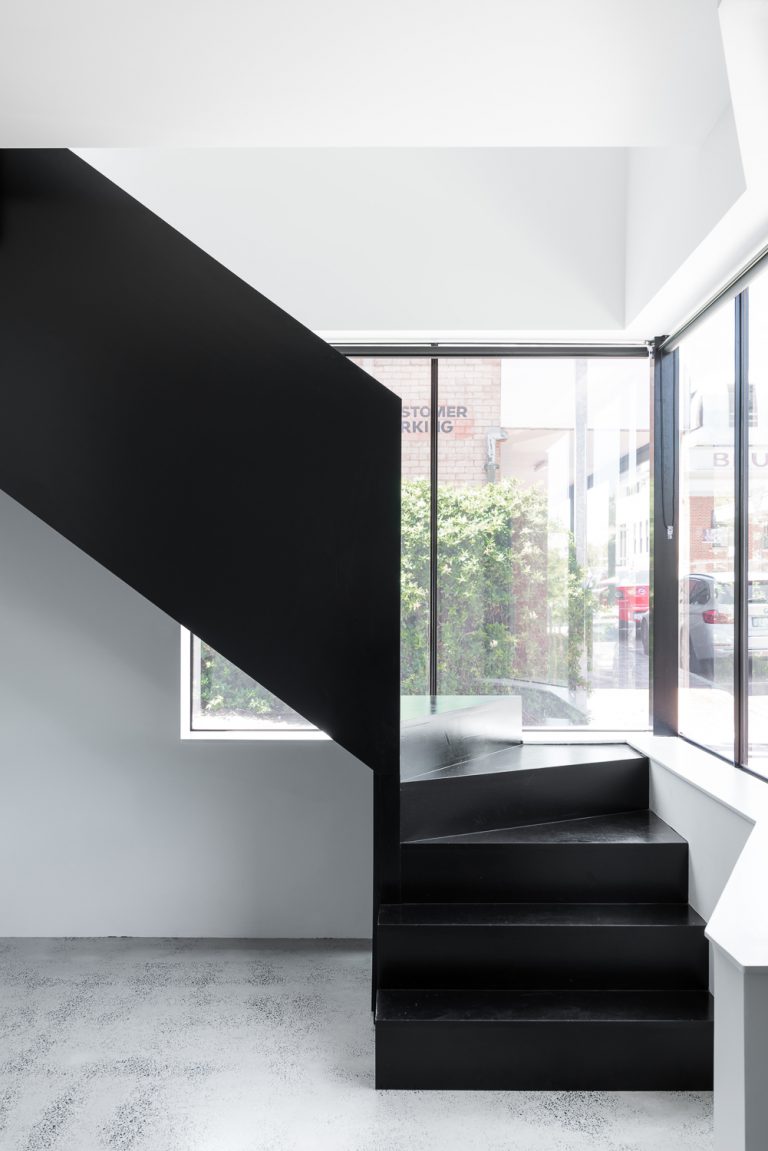 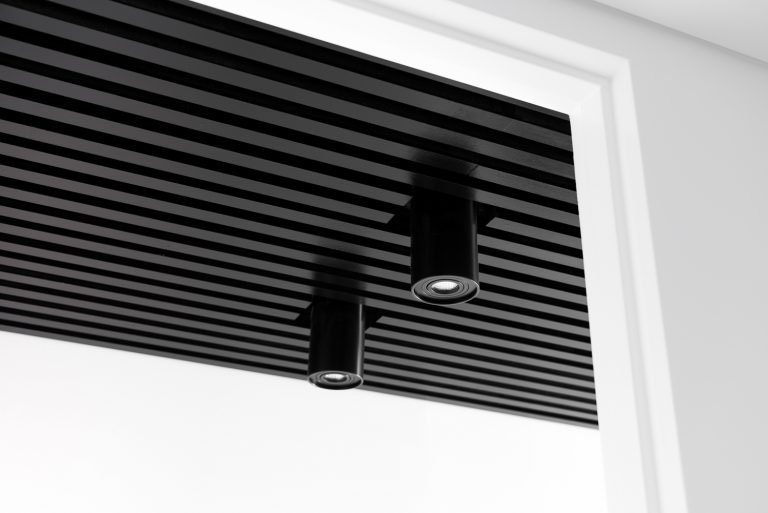 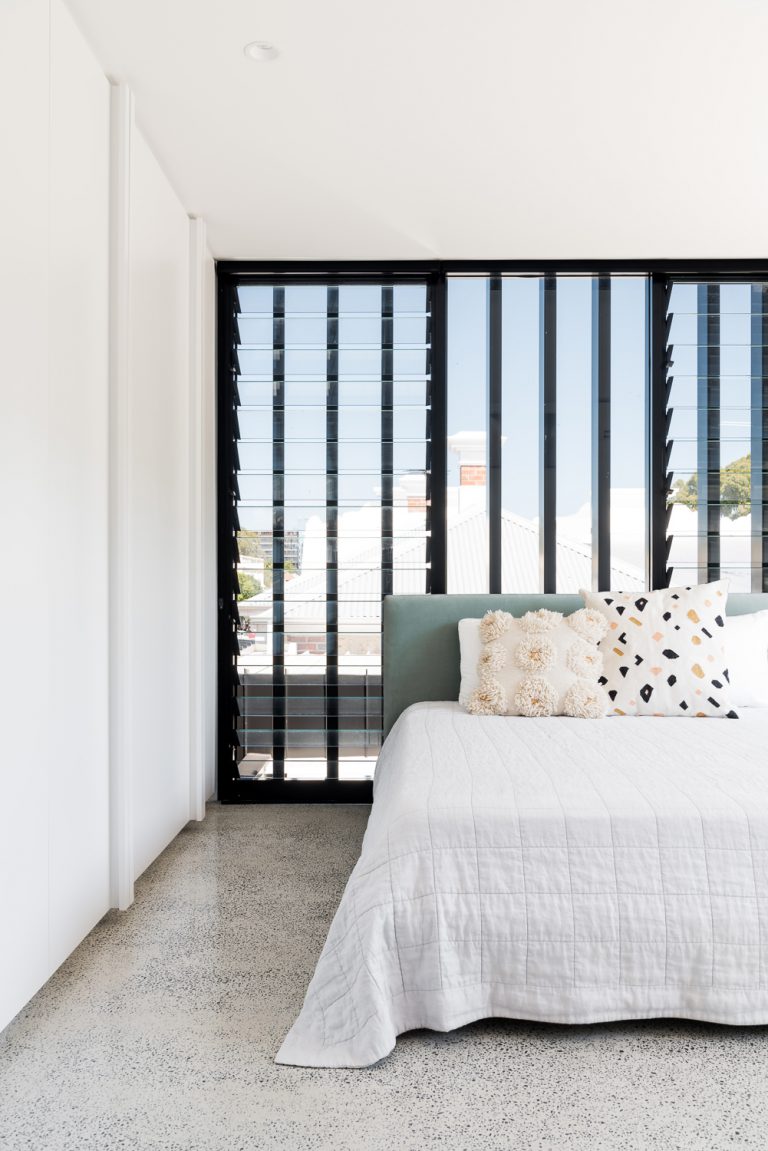 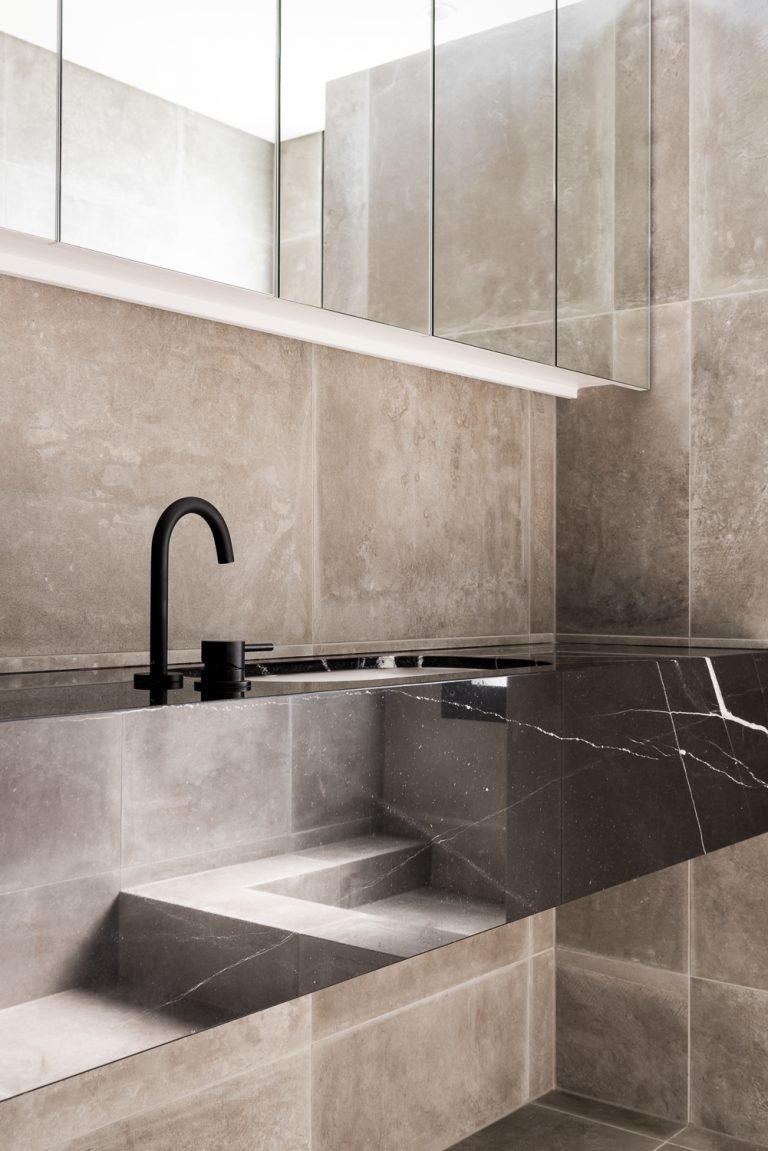 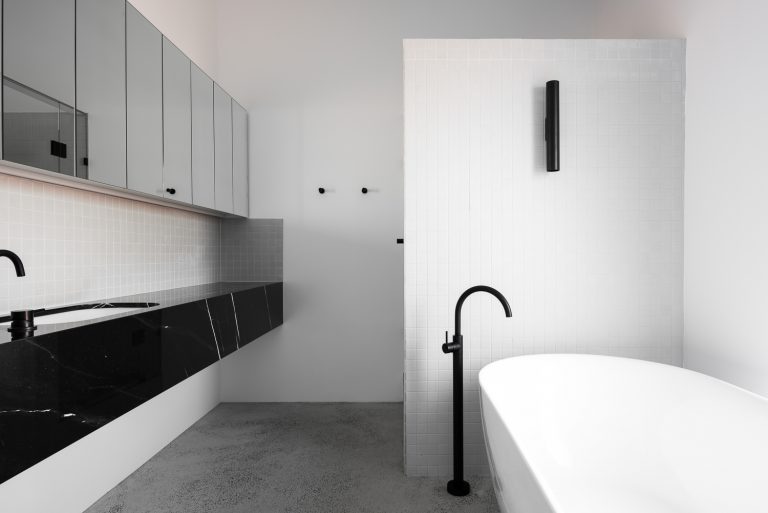 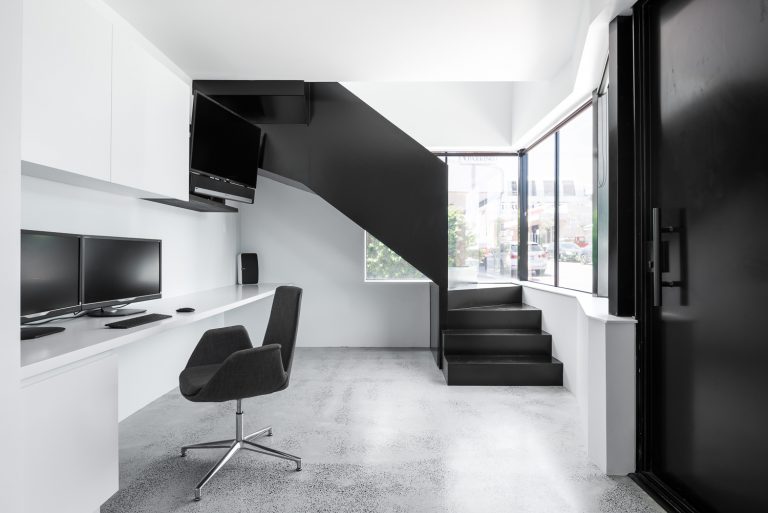 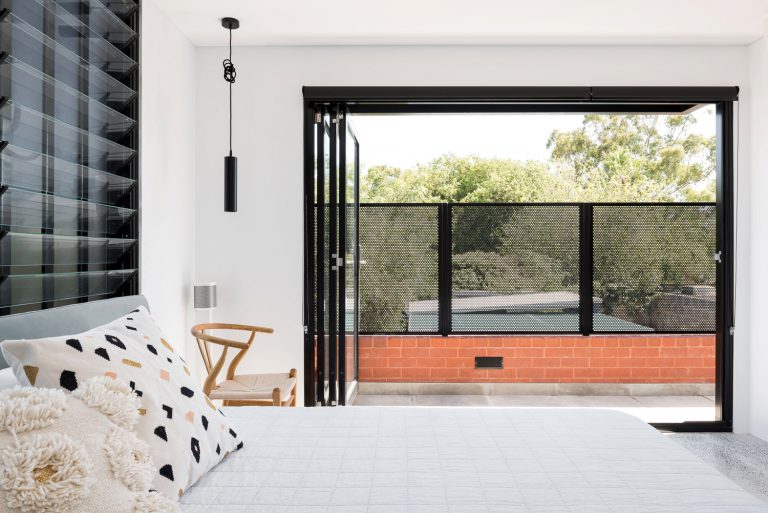