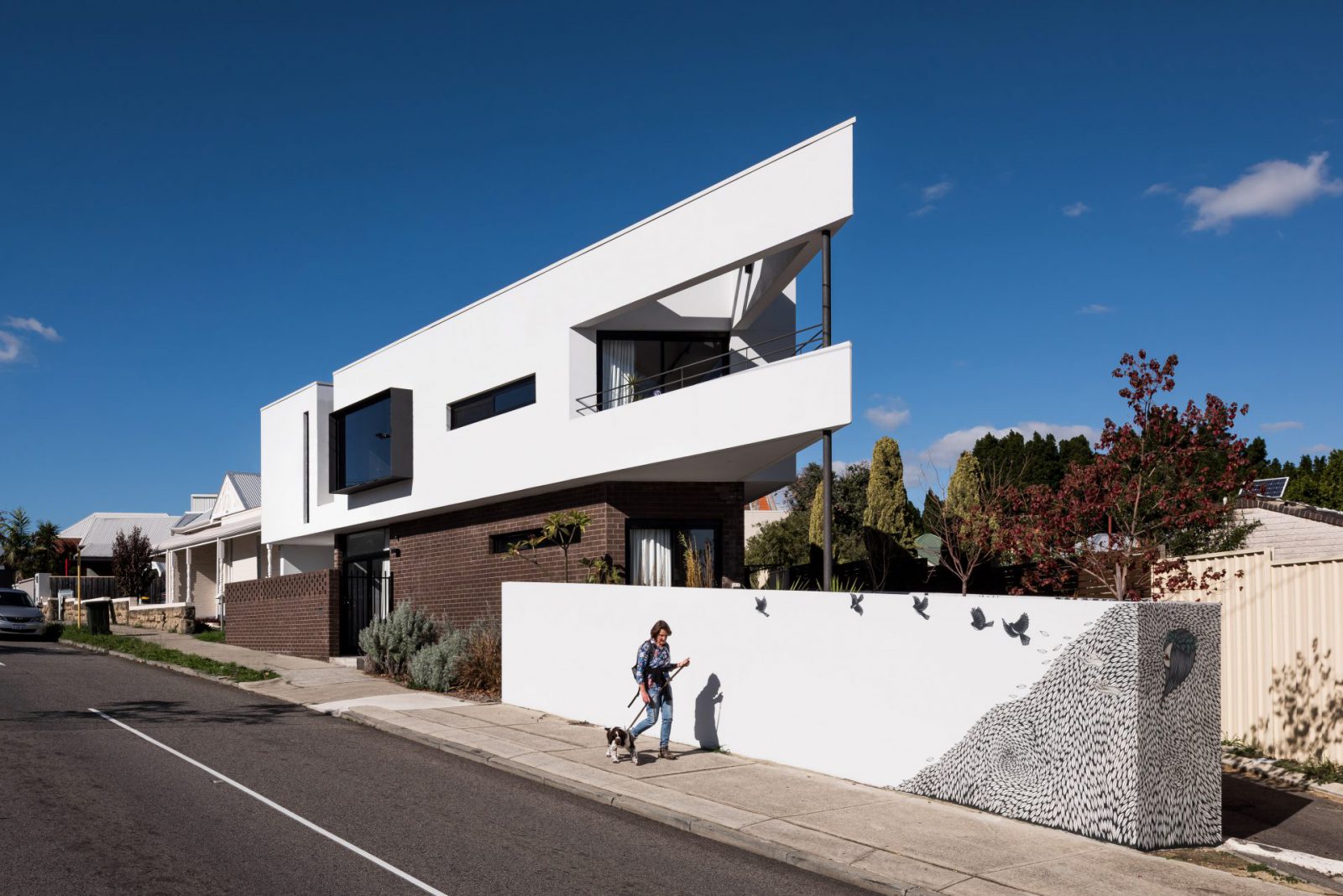 Living in smaller houses is a growing trend worldwide as land prices rise and people want to be closer to town centres and live with less stuff. Triangle House proves that small, oddly-shaped parcels of land can be successfully and affordably developed into high-quality, interesting homes.

The Triangle House was the architects own home, built on a triangular 180m2 lot. This challenging site has busy Vincent Street to its north and a 1.5m sewer easement to the rear boundary. However, it also boasts a prime location wedged between Hyde Park and Mount Lawley’s bustling Beaufort Street, while also being only a few kilometres from Perth city. The design was successfully negotiated through council to obtain approvals, creating 170m2 of building on the 180m2 site.

The brief called for a functional, low-maintenance home for a professional couple and their dog. The clients enjoyed the vibrancy of the area, but also had a need for privacy and a sense of sanctuary. As fans of Japanese simplicity, they wanted every space to offer multiple uses and ample inbuilt storage. It was important that circulation was efficient, so areas of the home that cost a lot but don’t give much back – such as hallways – were kept to a minimum. Custom-made furniture was also incorporated into the design where possible. A guest bedroom and bathroom is provided on the ground floor, along with a street-facing office for client access. The living areas and main bedroom are located on the upper floor, and feel as if they’re floating above the street.

The geometric forms of the house are bold and unprecedented in its immediate surrounds, but were also designed to complement the mix of cathedrals, block apartments, and character homes that prevail. Fortunately, local council was supportive of the modernist aesthetic and have encouraged a mix of new and old buildings to enhance the vibrancy and diversity of the area.

Every opening and sight line was carefully considered. A high-level expanse of glass opens the living area to the tree tops in nearby Hyde Park, providing a sense akin to being on a balcony. This large window also showcases Mary Street’s famous weeping fig trees to the south, yet its sill height protects the neighbour’s privacy by omitting views of the backyard below. A steel box projecting out over Vincent Street is a retreat for sitting and watching the street below; one-way glass ensures residents can see out, but outsiders cannot see in. Low-e, acoustic glass dulls any street noise.

There is an obsession in Perth about designing for resale purposes, rather than for the immediate user. But here, rather than attempting to squeeze a ‘3 bed, 2 bath’ home into the site, the architect opted for a design tailored to their unique needs. As such, extra space was given over to the living areas and main bedrooms – the places the couple would use the most. Instead of a third bedroom, a large open office was created (which can easily be converted into a third bedroom should a future owner desire).

Flexible spaces that can be used in a multitude of ways is crucial for smaller homes. In the Triangle House, a wall in the main bedroom can be opened to the living spaces on the upper floor to create one large, loft-style area. This makes both areas feel much larger than they are. In fact, the most common response when a guest enters the upper floor is ‘How did you fit this much space on this tiny block!’.

Every possession, from a vacuum cleaner and yoga mats to cooking implements, was designed to fit into an allocated storage space. For the owners, an uncluttered home conveys calm serenity – exactly how they want to feel when at home. However, there are times when the house has to cater for additional guests. The Nero Marquina marble dining table was designed to fit alongside the kitchen island bench for day-to-day use, but can be moved to allow eight guests to sit around it for parties.

Cross-ventilation was incorporated to capture afternoon breezes and enable air flow through the bedrooms at night. The windows were designed according to passive solar principles, maximising winter sun and blocking summer heat, which drastically reduces the demand for mechanical heating and cooling. During cooler months, daytime sun heats the exposed burnished-concrete floor slabs, which is then passively emitted to warm the house at night. 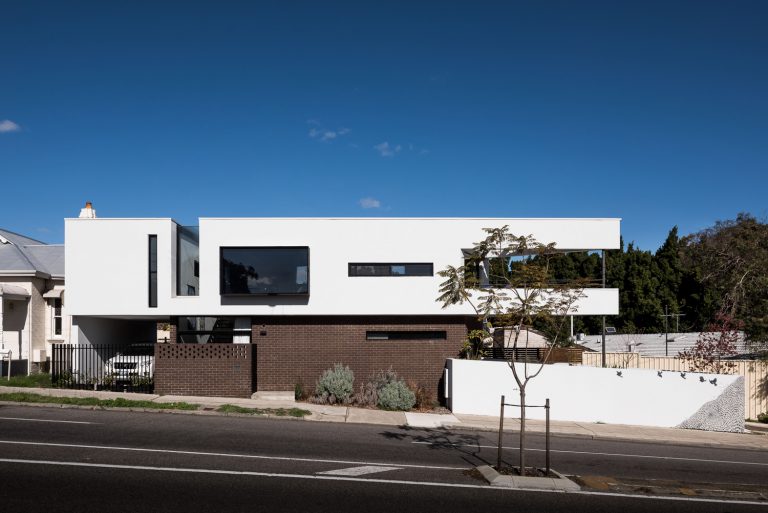 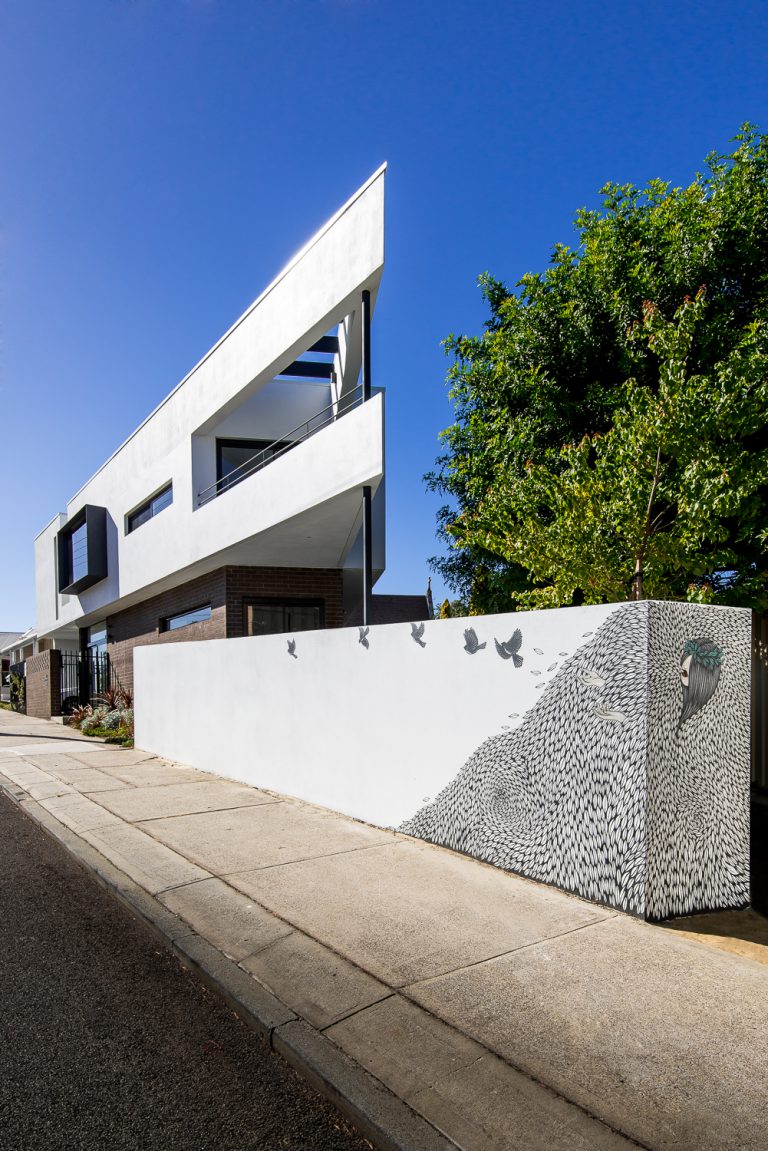 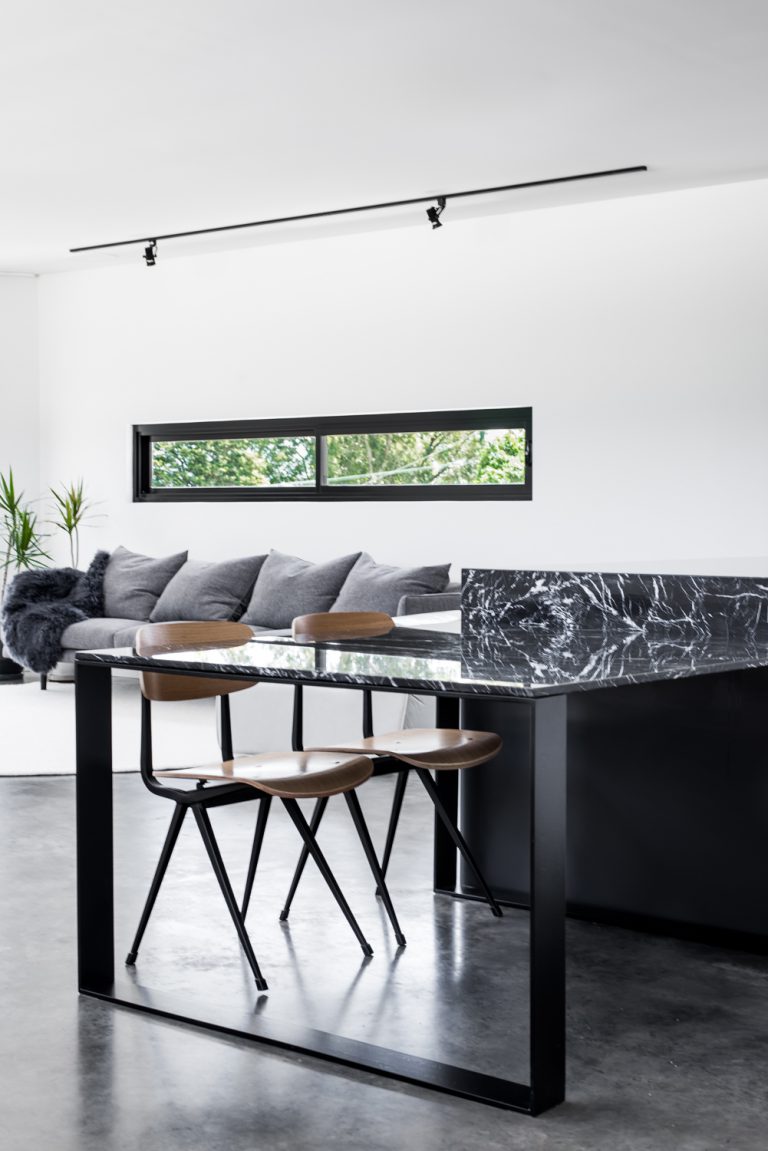 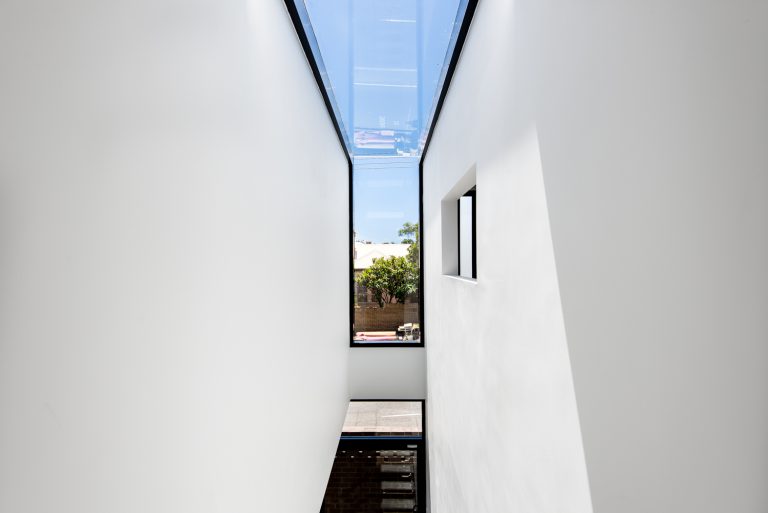 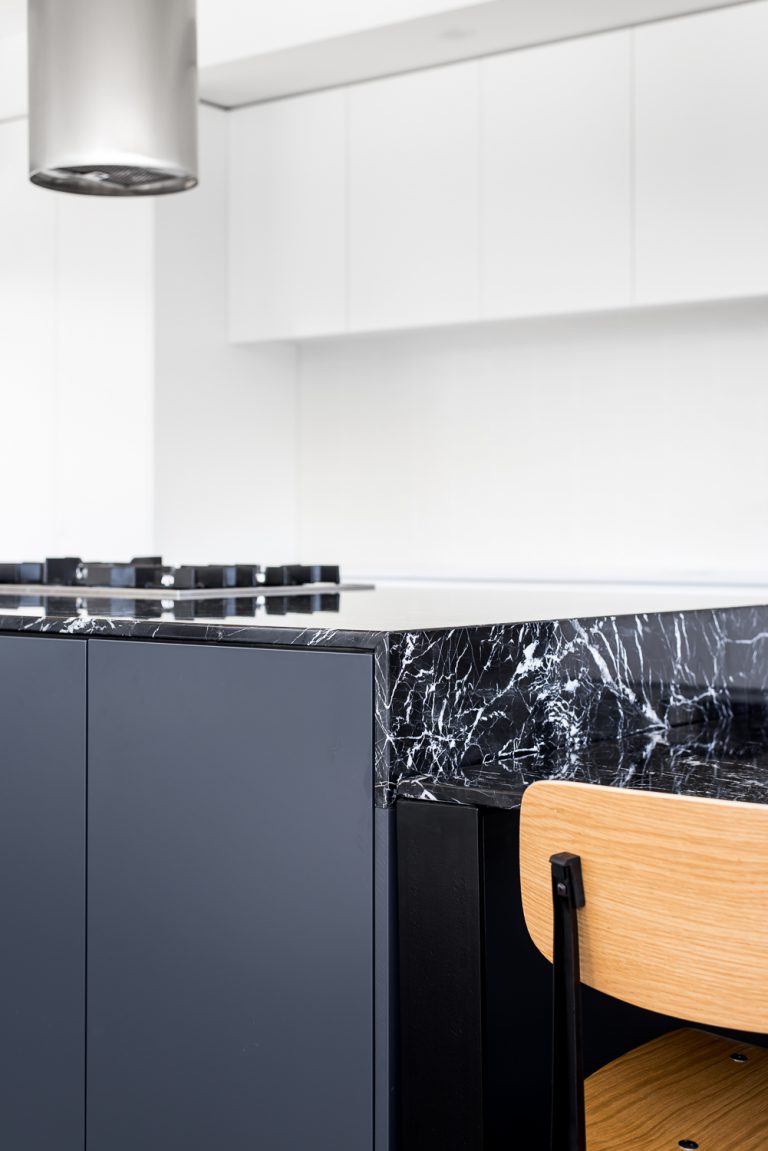 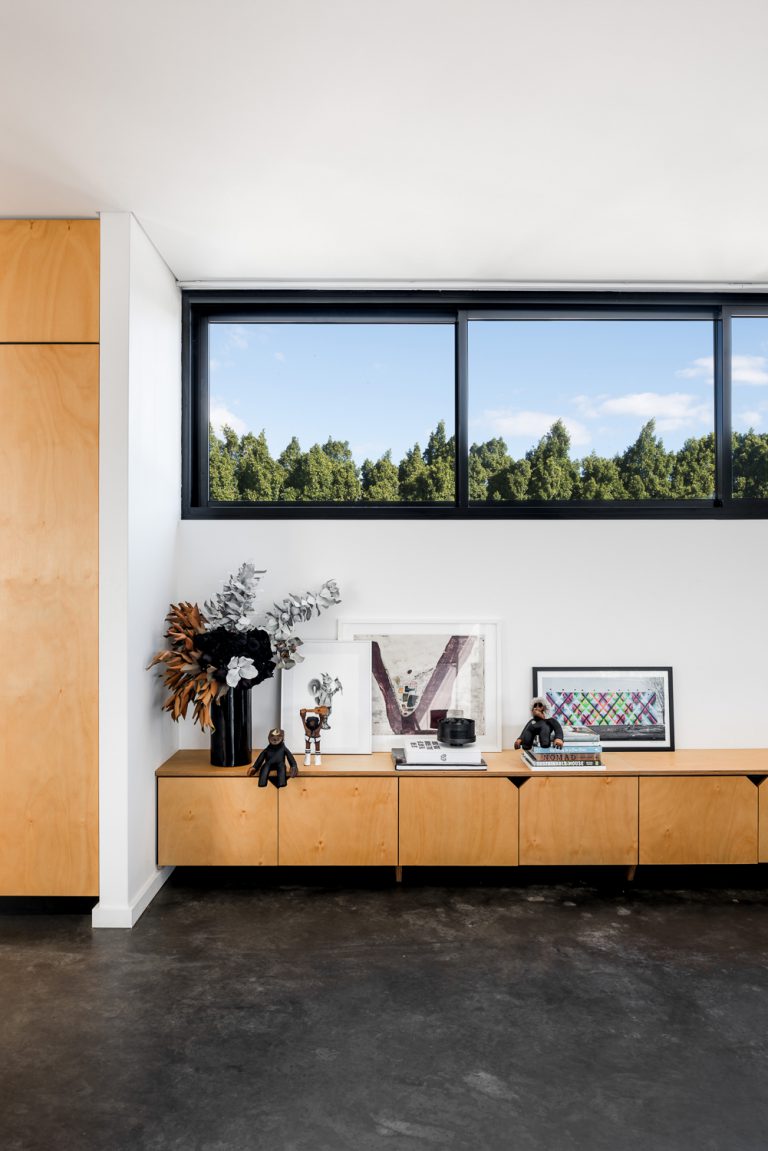 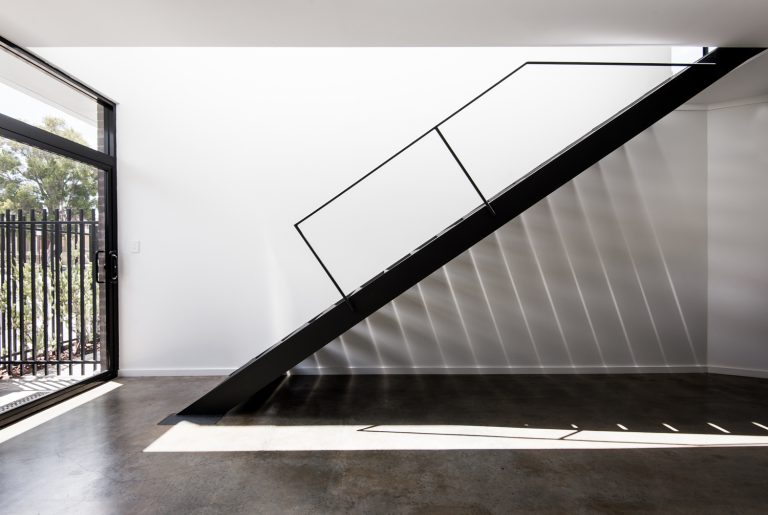 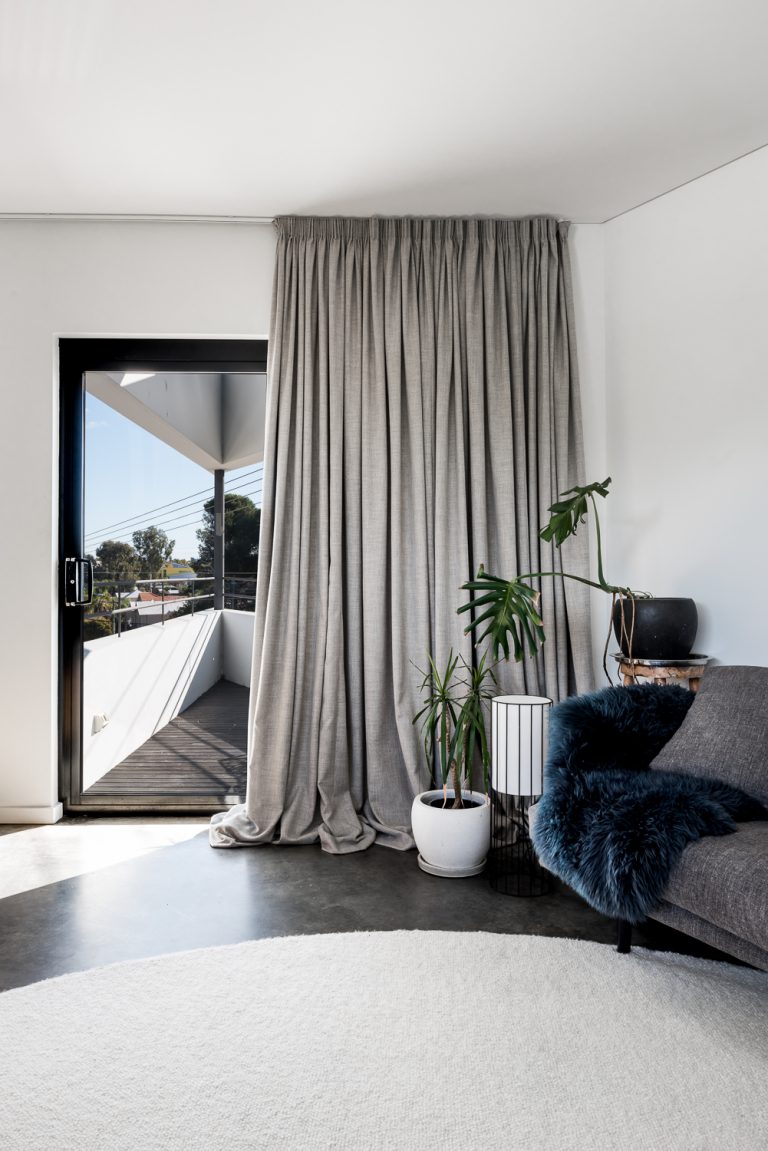 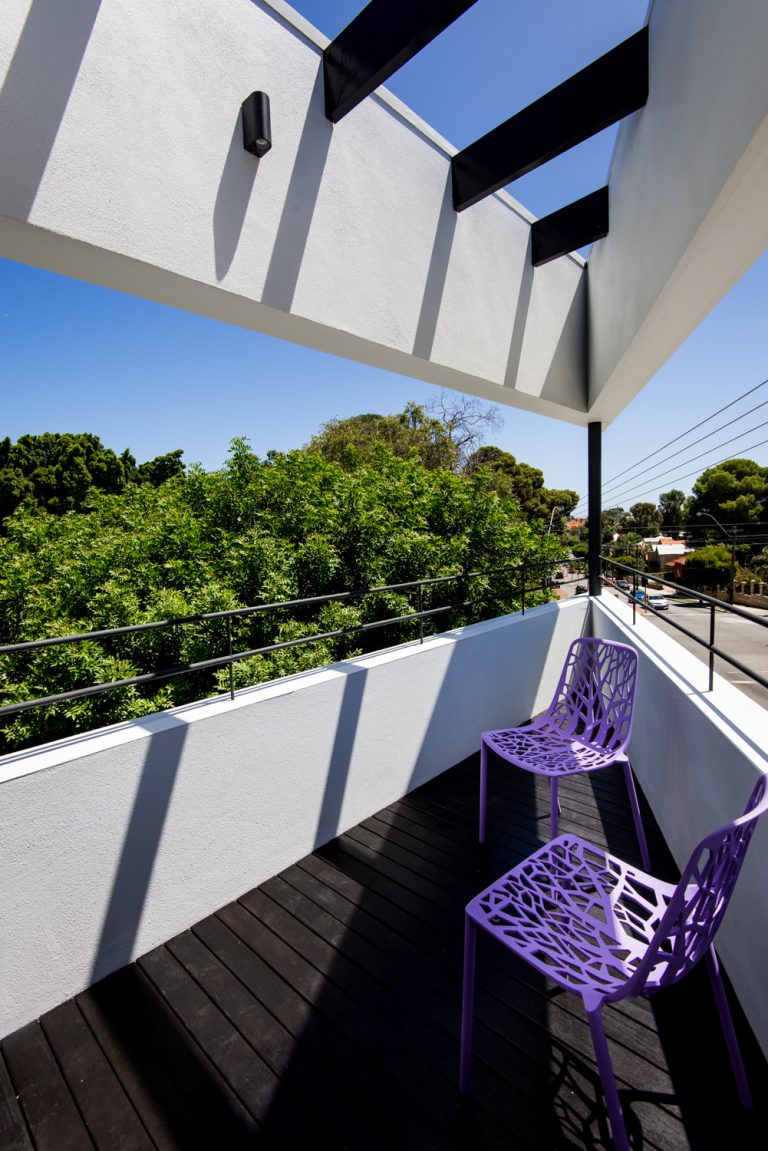 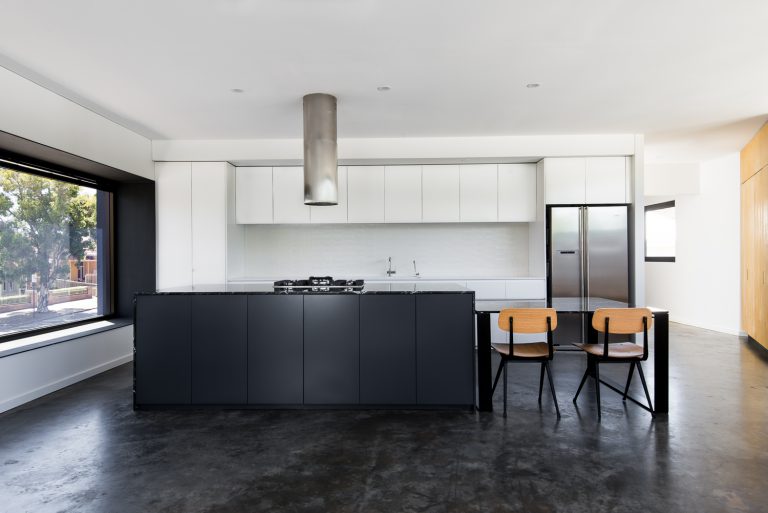 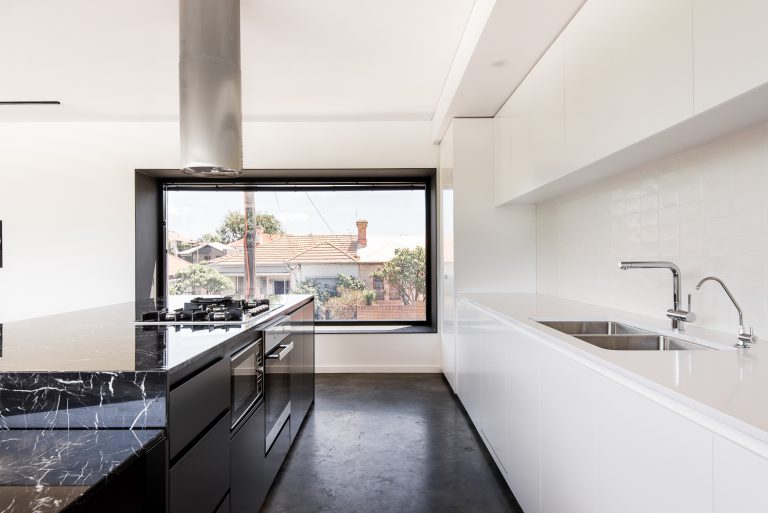 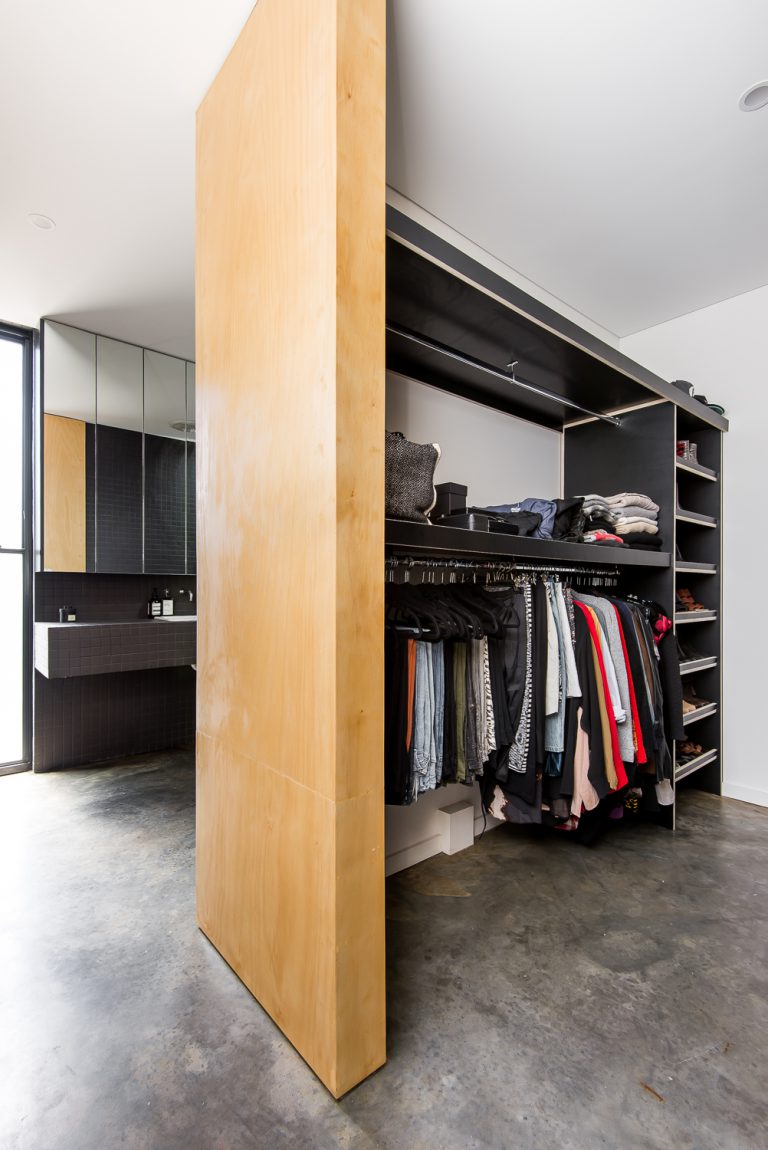 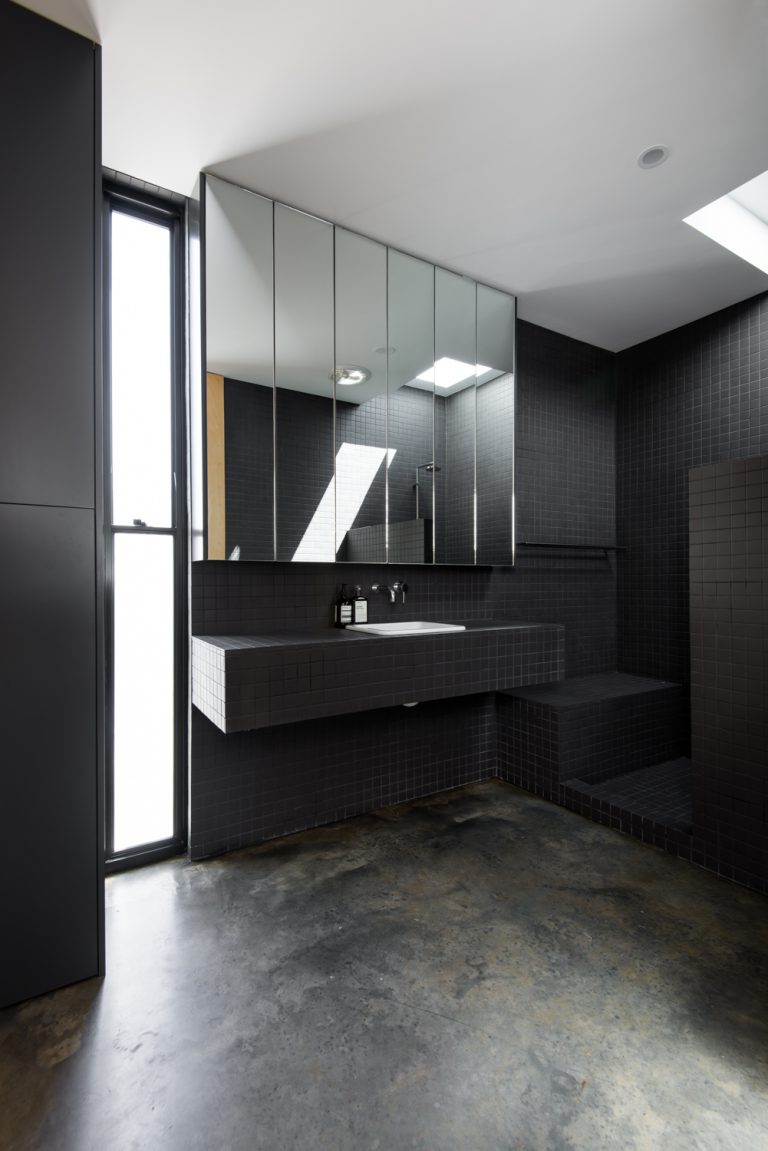 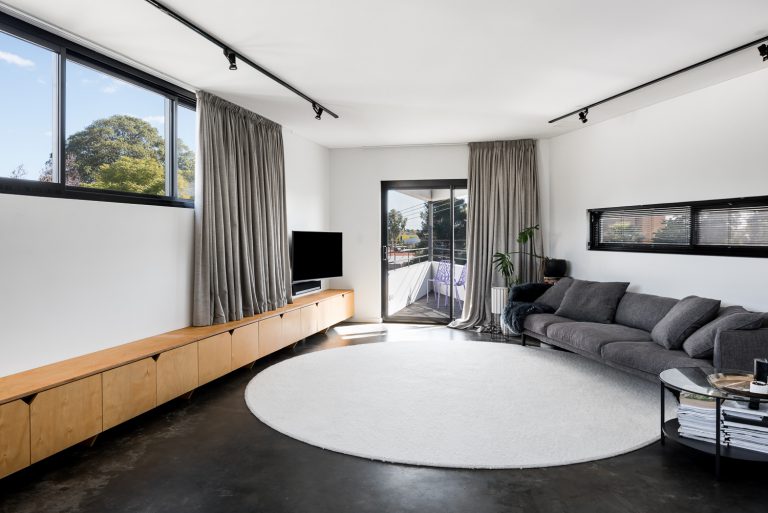 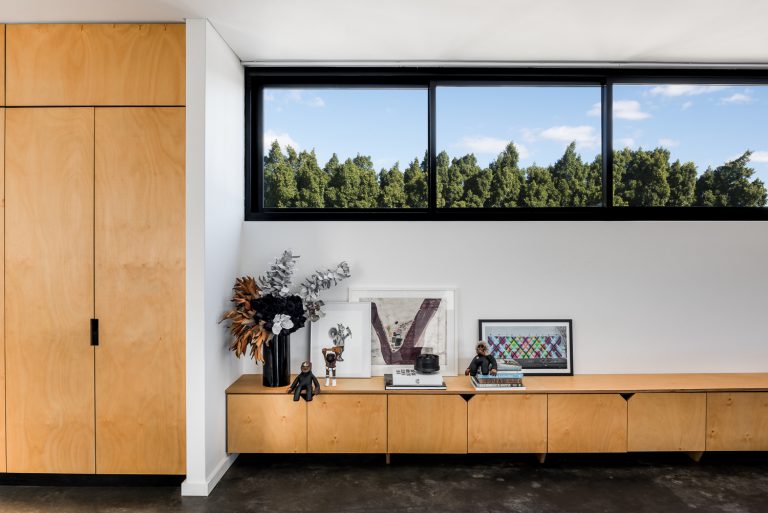 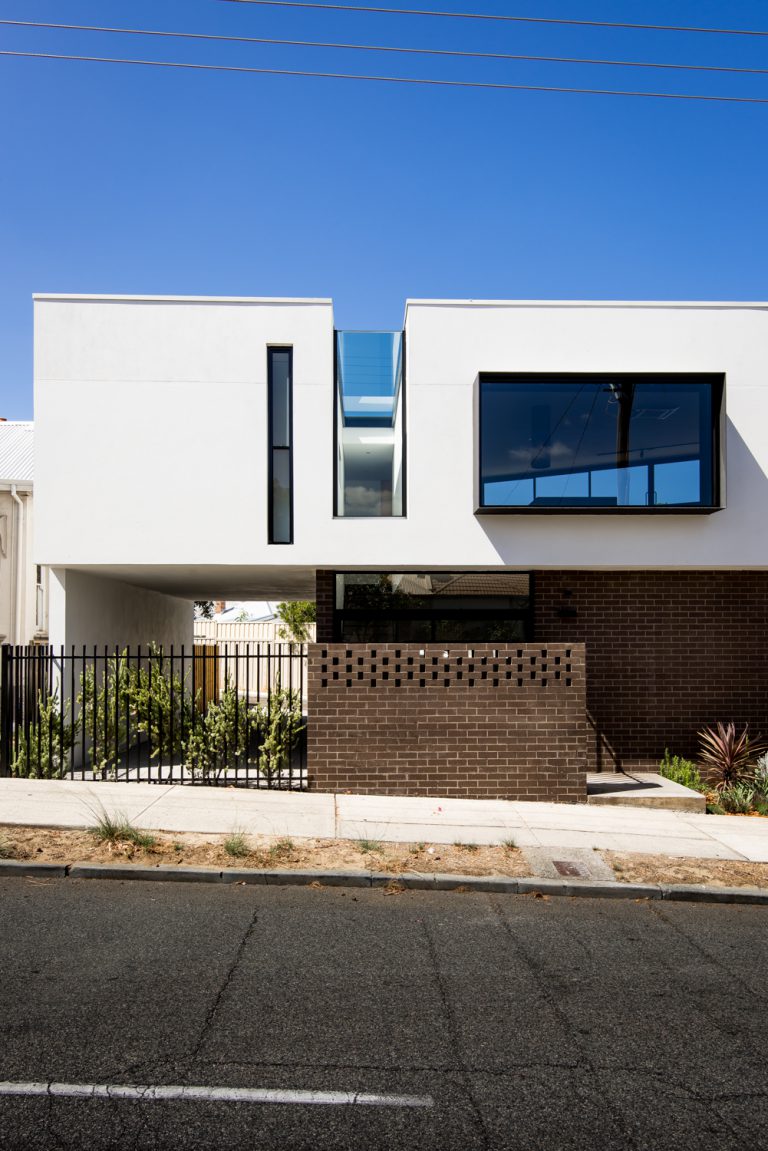 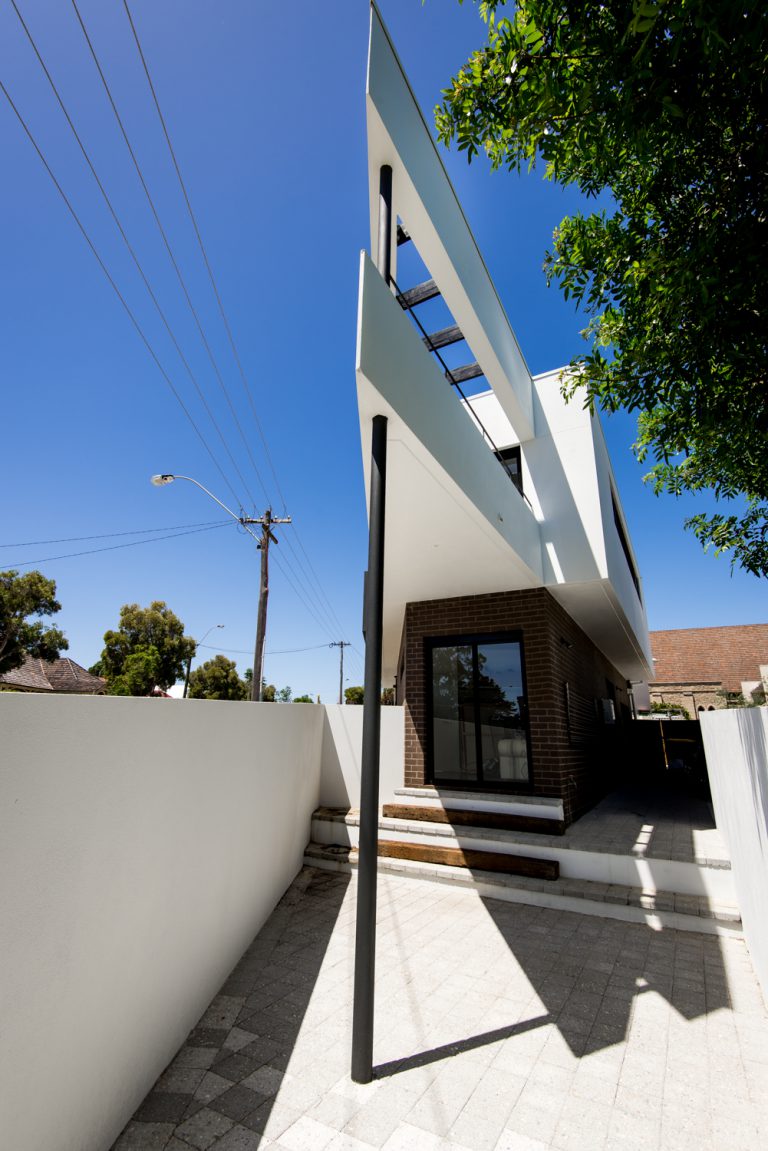 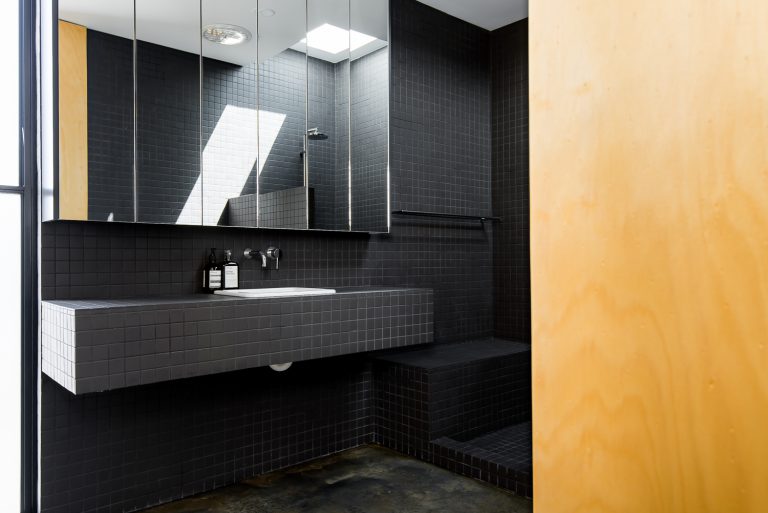 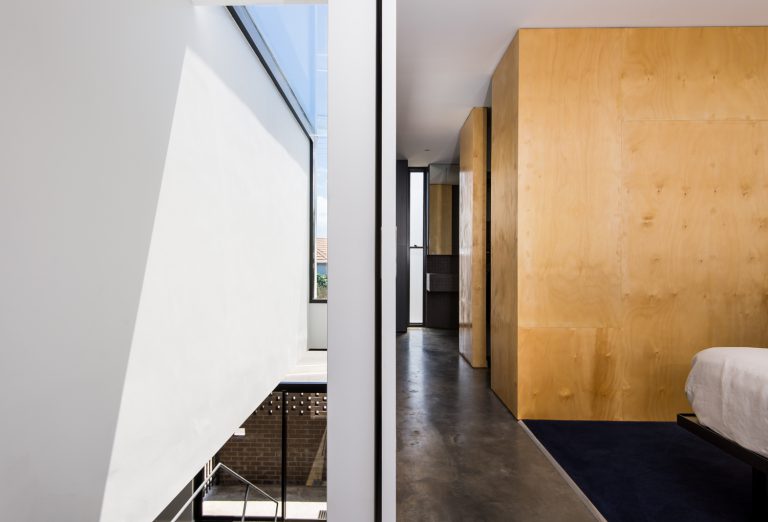 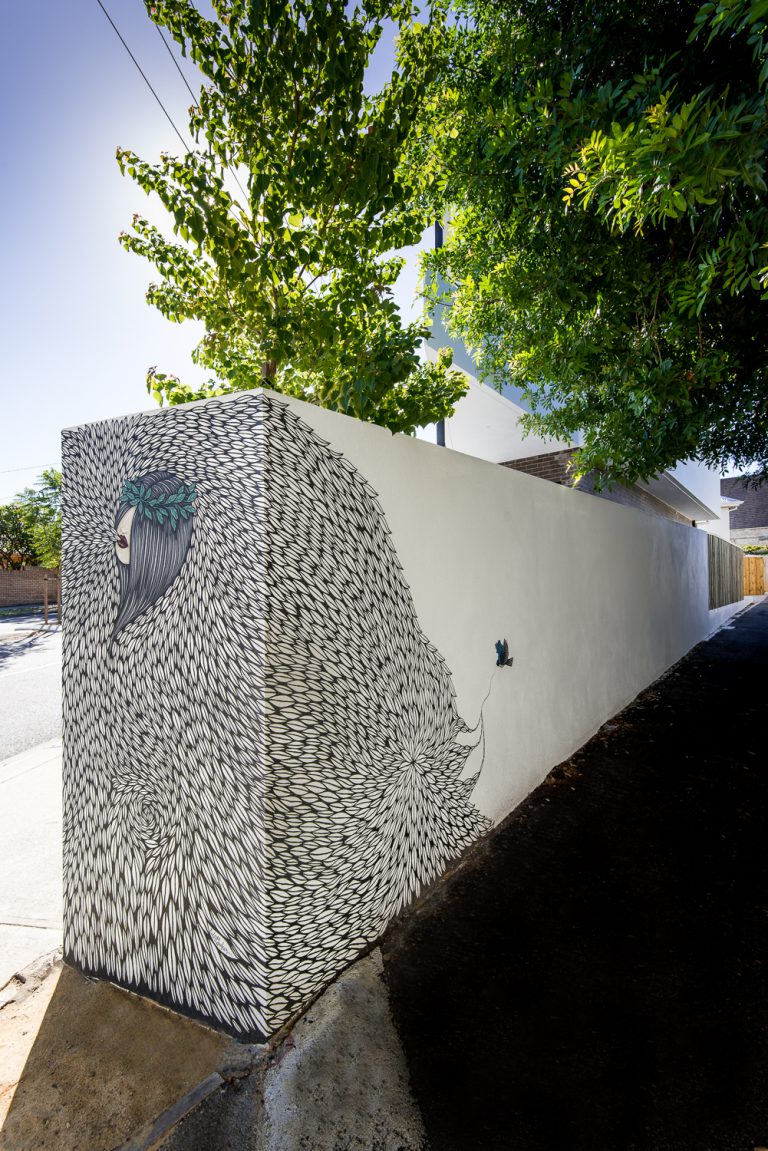 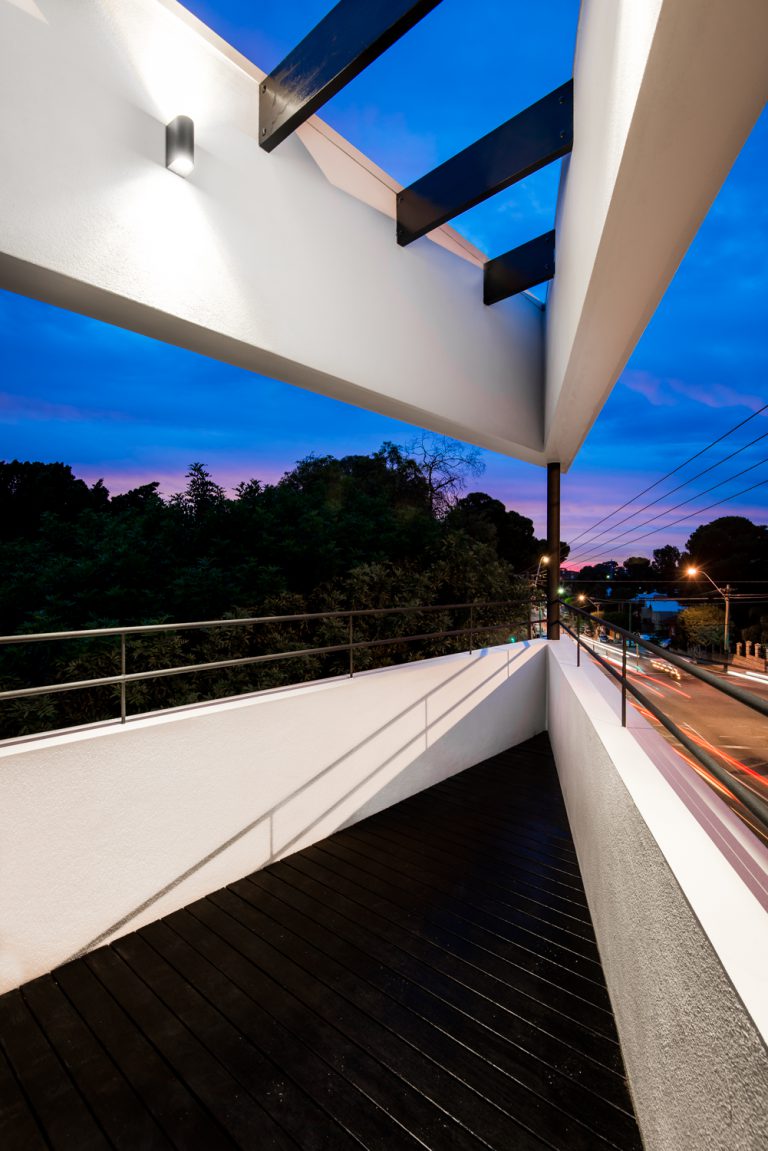 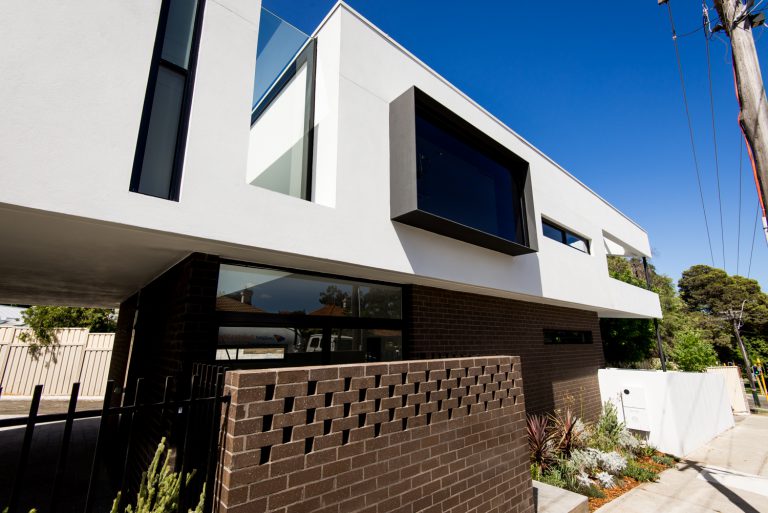 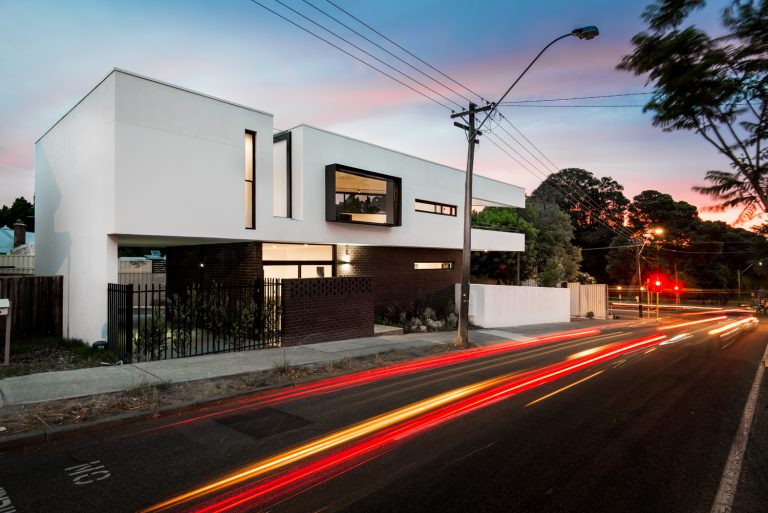