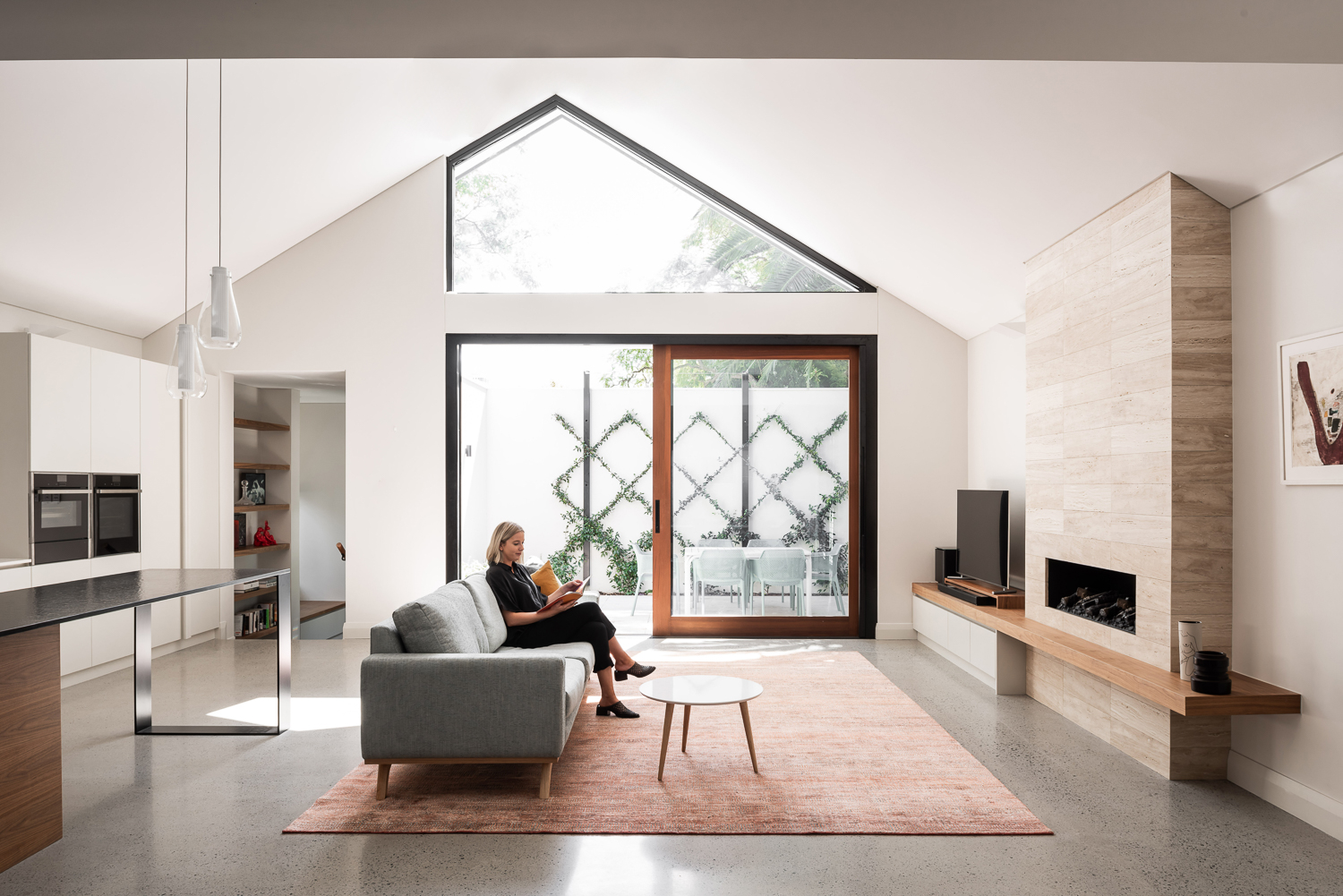 An inner-city retreat tailored for a couple who travel often yet plan to stay put in this leafy suburb for a good while. Three stepped floor levels follow the contours of the site, passing though airy living spaces into a courtyard. The sense of breeziness is amplified by the dramatic pitched ceiling which pulls northern light into the home while also framing views of the trees outside.

The owners were expecting a two-storey home as is typical on compact lots of this nature. However, given the need for an accessible home that will suit them well into retirement, we came up with a concept that was a little different – and which surprised and excited them. Adhering to stringent council requirements around roof pitch and height, materials and window size, we created a single-storey contemporary design. The three-bedroom, two-bathroom home is divided across three split ground-floor levels, allowing the creation of small courtyards to access the north light. While the building’s footprint was bigger than expected, this suited the client as it meant less garden to maintain and more intimate outdoor spaces.

After a tough run negotiating with both local council and the State Administrative Tribunal, the design was approved. City of Subiaco, at the time, had several conservative councillors who believed new homes should be designed to look like old ones. It was even suggested we use materials such as fake timber – every architect’s worse nightmare! For the street elevation, we were required to ensure the roof pitch and wall-plate heights exactly matched that of the neighbours, as did our window widths. Within such restrictive parameters, it was a challenge to avoid the home simply becoming a modern version of a yesteryear design. However, through the use of timber, steel and CFC cladding, we imbued the home with a contemporary aesthetic while also ensuring it remained low maintenance for the owners.

Both space and budget was weighted toward those areas the owners told us they used most – the living areas and their master bedroom suite. A key feature of the living room is the soaring pitched ceiling which opens to the northern courtyard. This outdoor space was fitted with retractable shading, allowing the owners to control the sun’s penetration throughout the year.

Who doesn’t have a soft spot for a reading nook? The passage between the living area and the master bedroom acts as a tiny library, with floor-to-ceiling shelving flanking a deep window seat. With the window facing out to the courtyard, it’s a space that invites you to curl up in the sun with a good book.

We try to avoid using too many different materials and finishes in a project; we find consistency calming and more cost-effective as we can order larger amounts of each element. The Carrera marble used for all the bathroom benchtops was sourced from off-cuts. The Kabuki granite benchtops in the kitchen and laundry were cut from the same slab.  A salt-and-pepper polished concrete floor runs through the home, including bedrooms. Travertine stone paving covers external areas, while this same material was cut into small pieces and used as an internal, un-grouted cladding on the fireplace. American black walnut veneers accent the cabinetry and add warmth in contrast to the concrete flooring.

There is an abundance of space for both storage and preparation in the open-plan kitchen. To ensure a sense of openness, the back run of cabinetry was colour-matched to blend in with the walls and coated in a 2-pac finish.

An exposed concrete floor slab is the most effective way to achieve passive heating during winter – here, the north-facing glass in the living room allows the slab to absorb and store the heat during the day and then release it at night. Louvered windows at the other end of the home capture the south-westerly breezes and cool the home on warm summer afternoons. 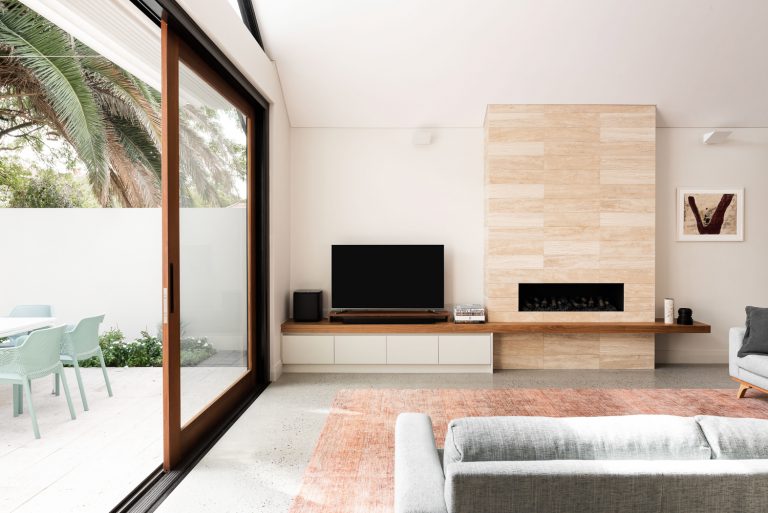 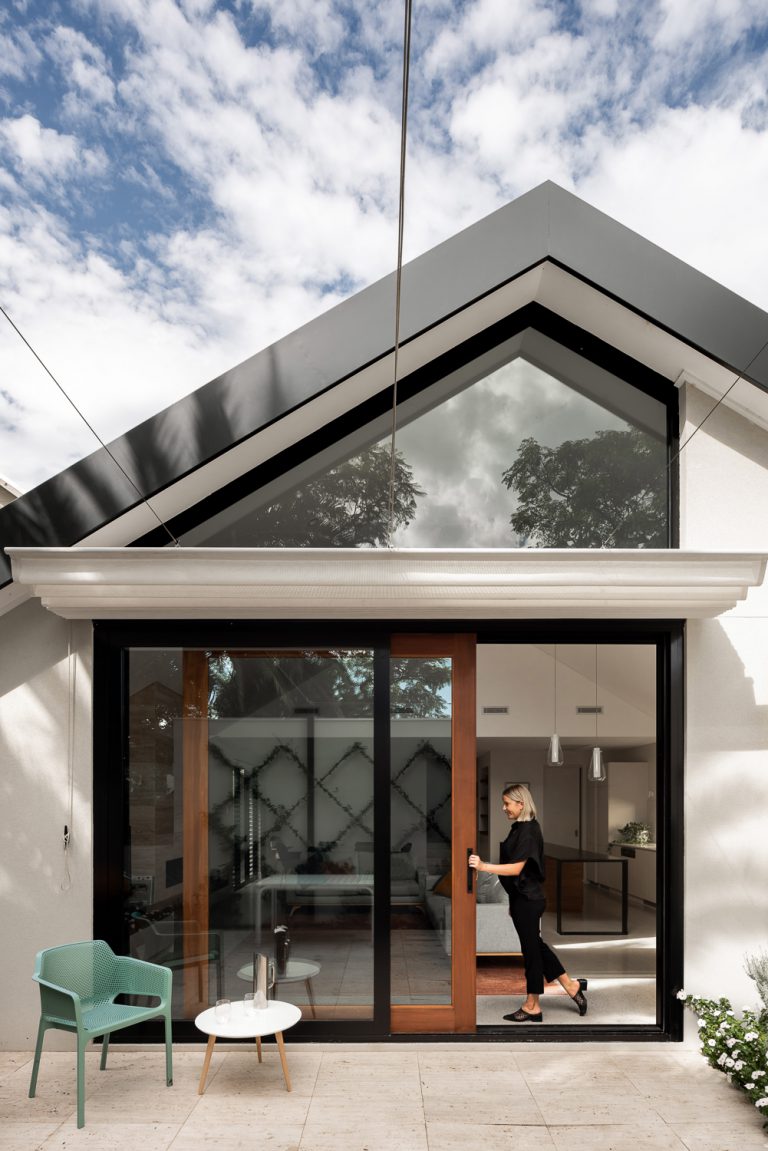 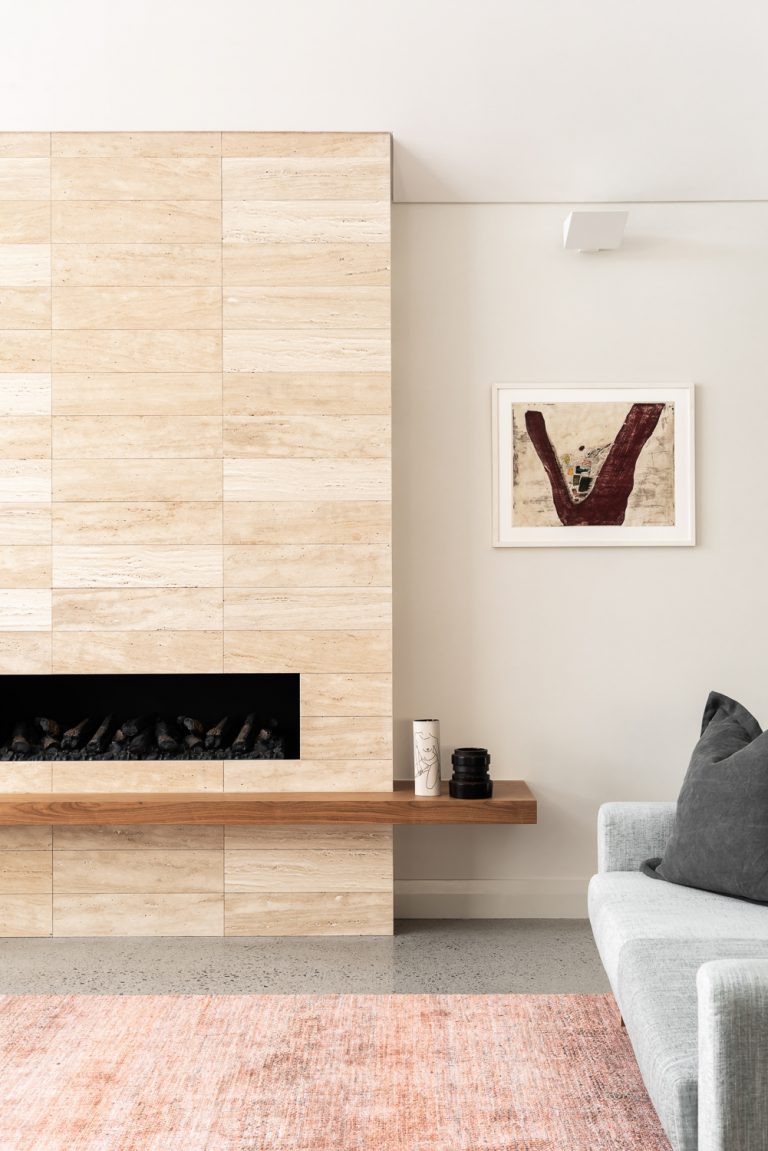 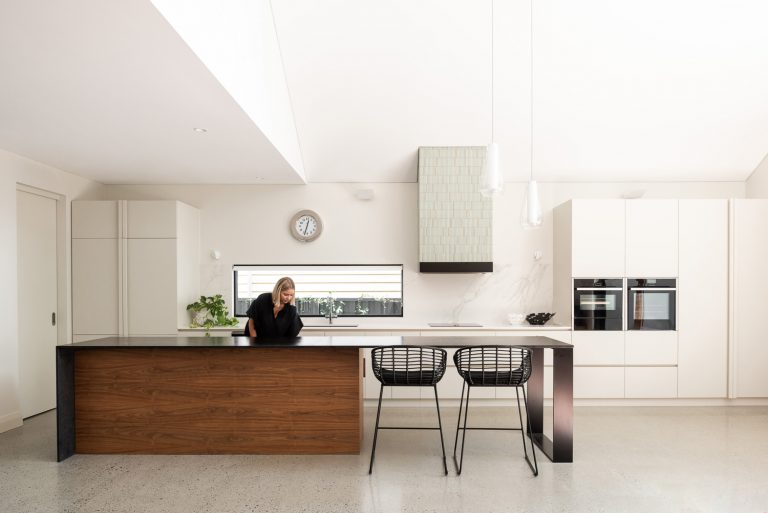 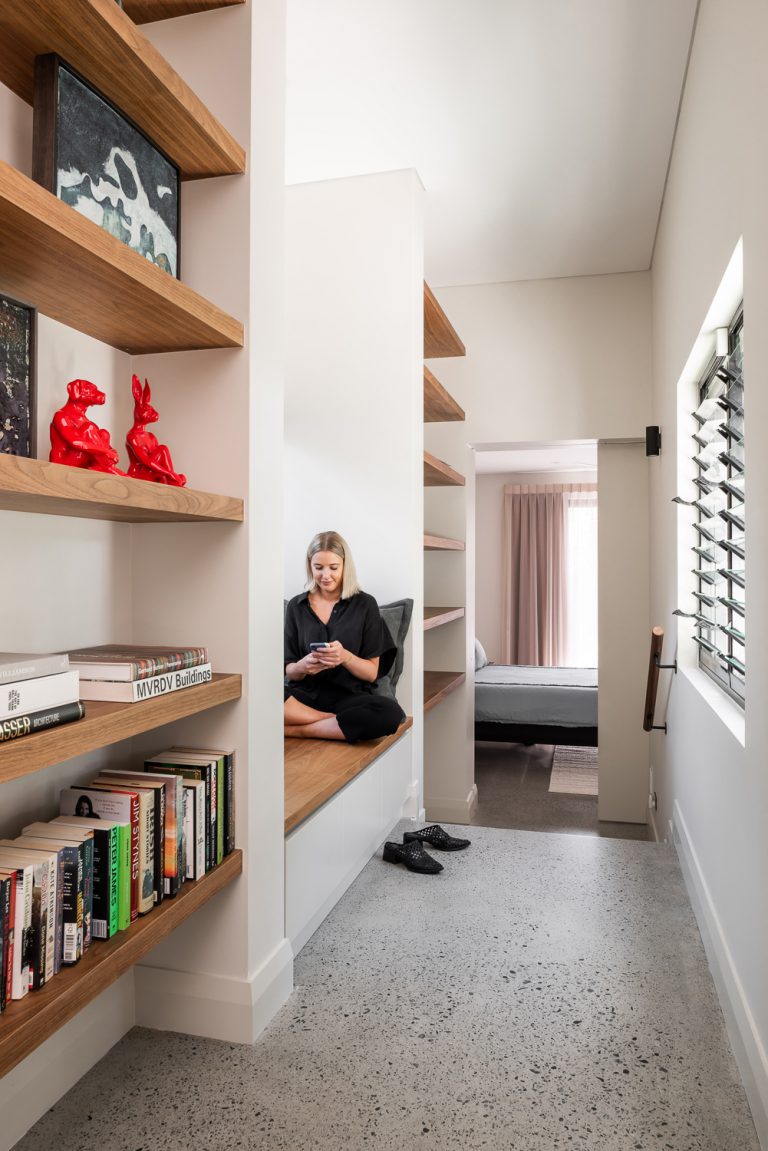 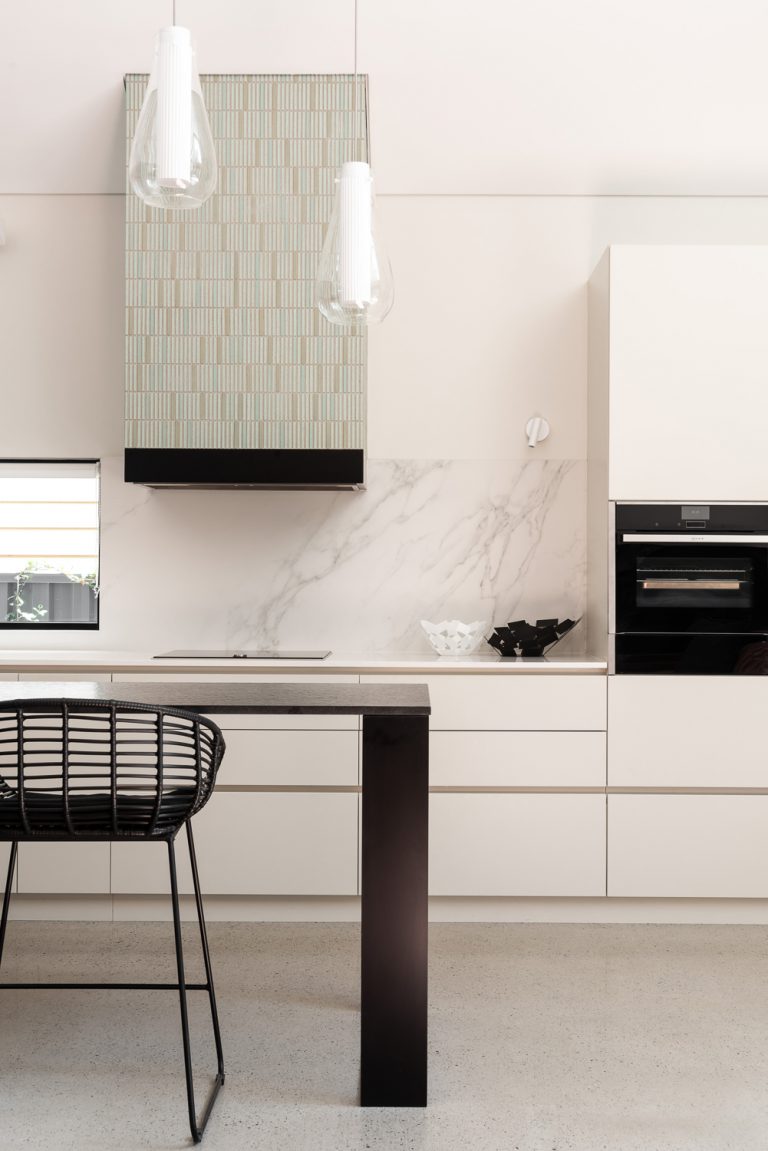 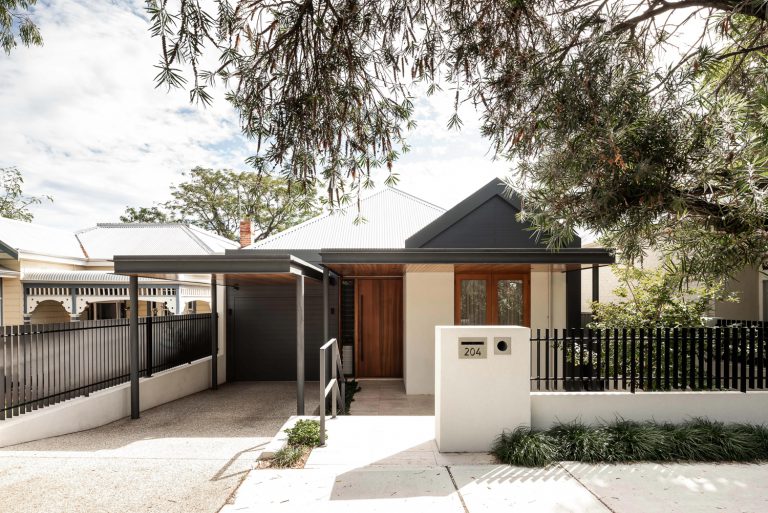 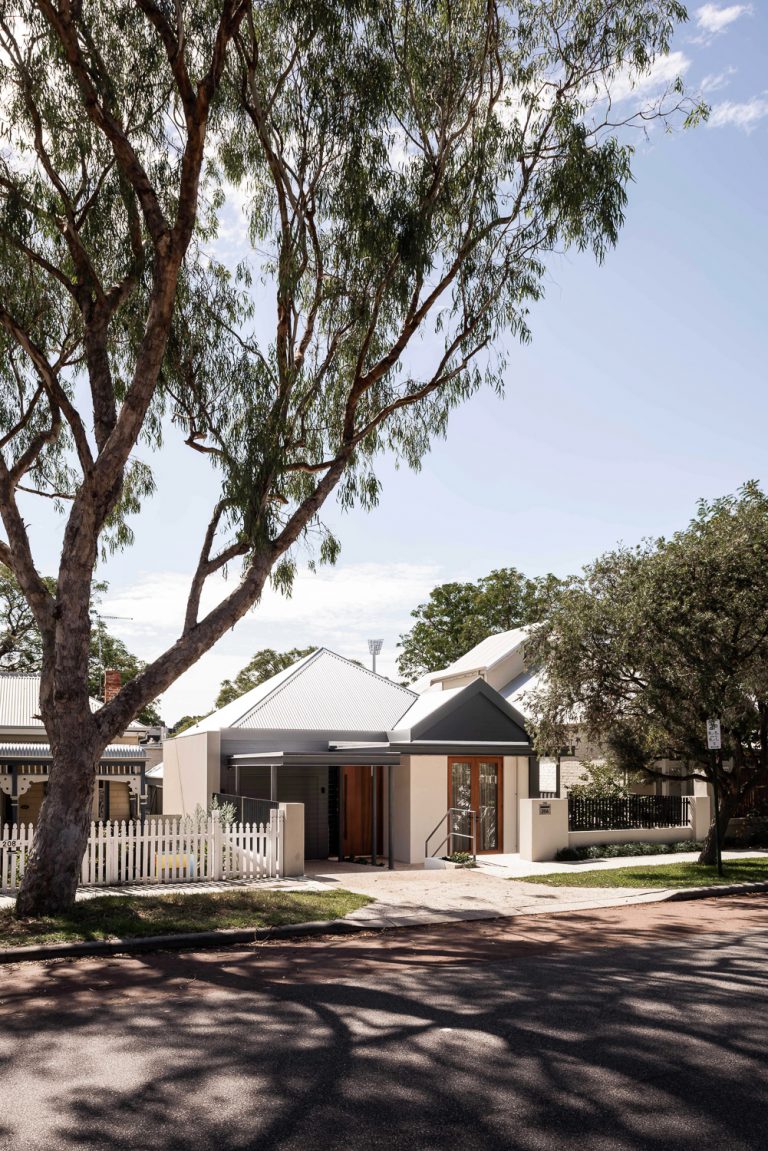 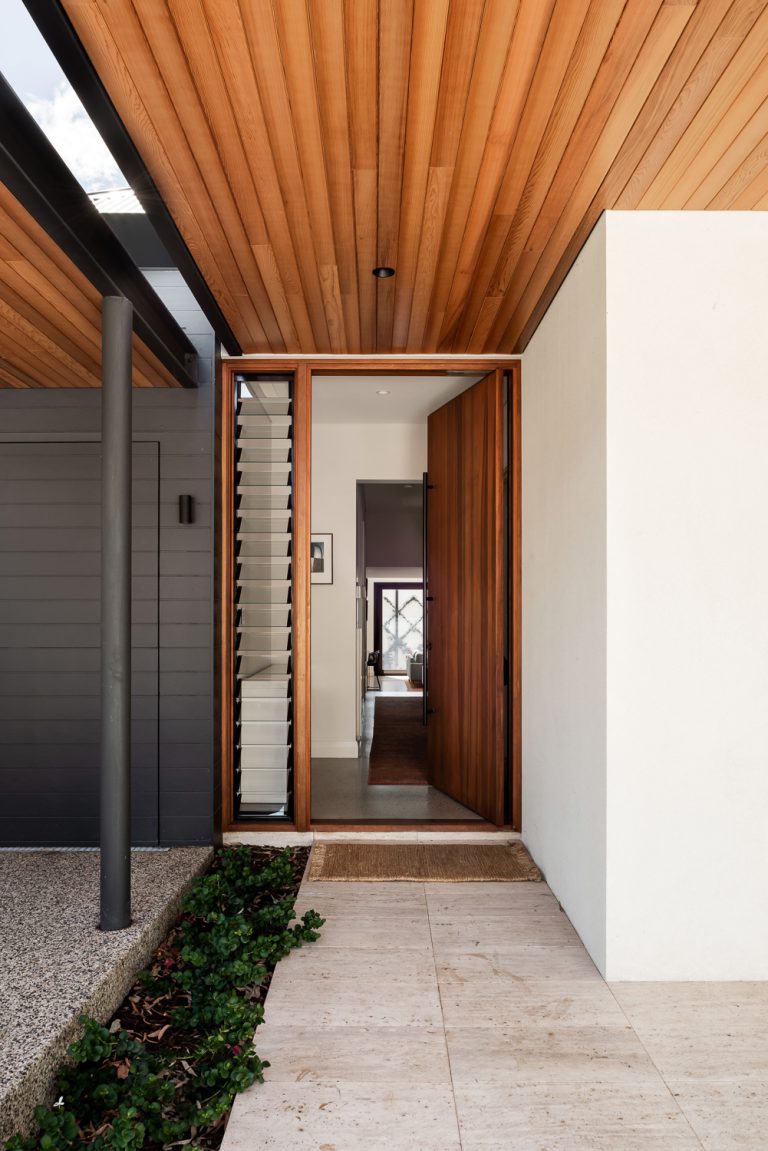 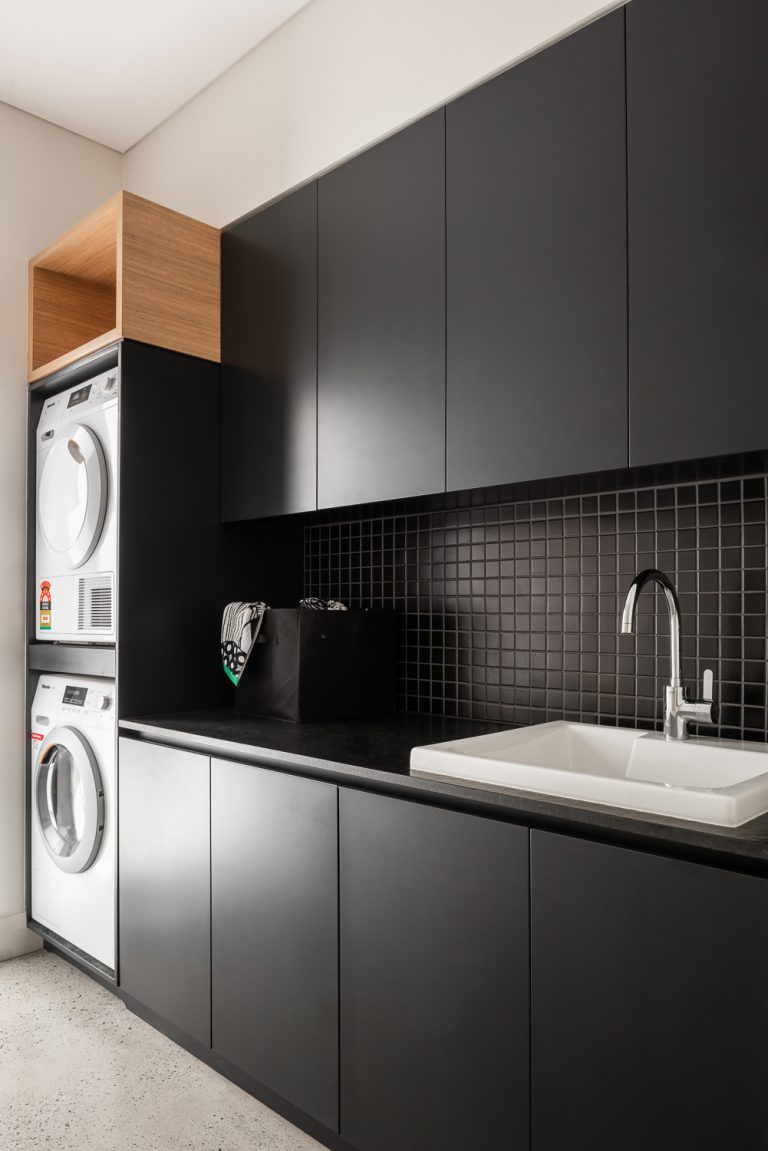 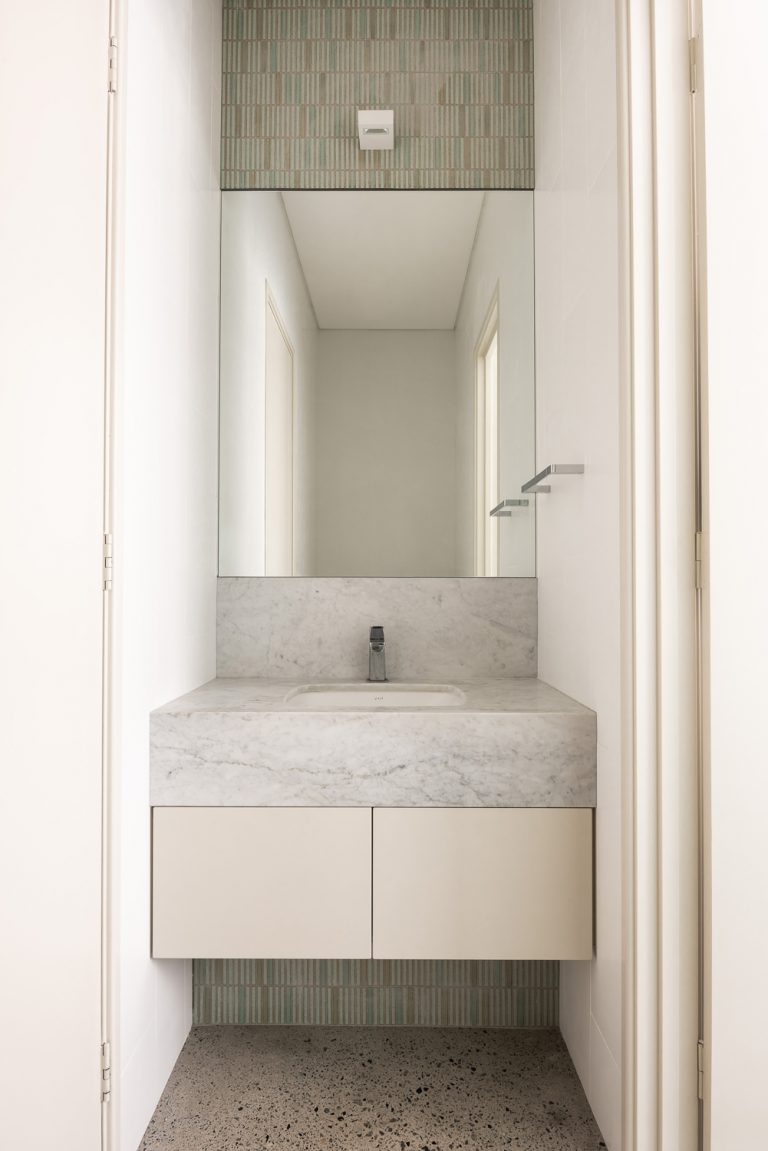 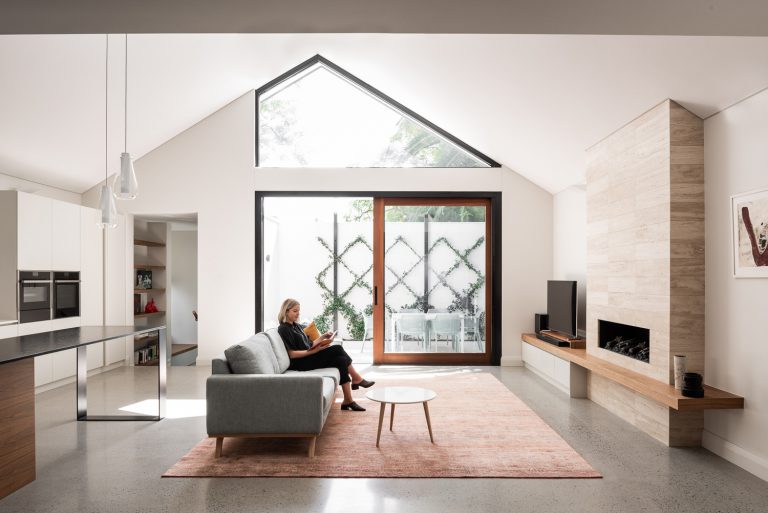